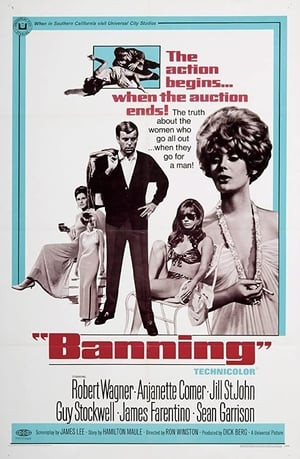 A playboy golf pro, Mike Banning, is down on his luck. Kicked off the circuit for alleged cheating he is forced to hustle for a living. Moving from one Country Club to another Banning uses his talents to hustle golf and women while trying to stay one step ahead of an irate loan shark.

A playboy golf pro down is on his luck. Kicked off the circuit for alleged cheating he is forced to hustle for a living. Moving from one Country Club to another, he uses his talents to hustle golf and women while trying to stay one step ahead of an irate loan shark.

Love, lust and money on the links; golfing soaper is up to par...

Robert Wagner's expressionless approach to acting is utilized to good effect in this soaper involving a playboy golf-pro from the country club circuit who enters a doubles tournament with prize-booty attached...and shady dealings on the side. Universal drama (still unreleased to any home-viewing market) looks terrific in vivid colors, and features a fine music score from Quincy Jones (who received an Oscar nod for the film's main theme). The characters are not a lively lot (except for sultry-eyed Jill St. John), but the third-act golfing sequences are extremely well done, helping even sports novices to become absorbed by the plotting. Golf is not the most cinematic sport, yet director Ron Winston is very straightforward and focused, and he's careful not to let the melodramatics overshadow the nuances of the game. For golfing buffs and aficionados of '60s style, the film can't miss. **1/2 from ****

An unseen(?) flick well worth seeing, though not see-able(?).

A soaper posing as a sports film. What's to like for this male (besides the final golf contest)? First there are three(!) knock-out gorgeous ladies who could also act, of all things. The male supporting players are excellent. So? So RJWagner shows us how it can be done--acting and explosive chemistry with the ladies. Is this a projection of the real Wagner rather than the suave cool non-superstar apparently undeterred by the fickleness of fame. And he still works and plays and makes a difference with gusto. A comparative case in point is WINNING (almost rhymes with BANNING). This Newman-Woodward vehicle--another sports-soaper--has Wagner as third banana showing the big star what chemistry with the leading lady (and Newman's wife) and with Newman himself is all about. QED.

I've always had a soft spot for Anjanette Comer. Here, she's one of three beautiful leading ladies, and the one sought by leading man, Robert Wagner (as opposed to leading lady #2, Jill St. John, whom he married in real life). Leading lady #3 is Susan Clark, who doesn't golf in this golf movie, but would go on later to play golf's greatest gal, Babe Didrikson, in the latter's TV biopic.

I watched this tonight on the Golf Channel. It didn't carry a rating, but one supposes it ran uncut, except that save for the titles, its original Techniscope was panned and scanned to TV size. (It did not, of course, run uninterrupted by commercials.)

Wagner is in top form here, taking precise swings, both on and off the course. All the lead actors, as well as a host of recognizable character actors of the day, turn in credible performances. (Gene Hackman has a relatively small, but pivotal, part.)

Speaking of the golf (which actually consumes but a small part of the movie), I kept wondering about the ratio of golf shots to camera shots, i.e., how many takes it took to get the lies the director wanted in order to tell the tale.

What makes this movie interesting are the cast, the photography, a few plot surprises, and a look back at the styles, the cars, and the mannerisms of forty years ago. Slightly above average.

Viewed this film in the movie houses and then was able to tape this film from TV. I thought that Robert Wagner(Mike Banning),"Hart to Hart",TV series'79 showed his great acting skills and his charming ways as a golfer who was playing the role with his game of golf and acted like a real LADIES MAN! with all the wives and charming available hot looking women. Jill St. John,(Angela Barr),"Tony Rome",67,put on the charm for Mike Banning and was pretty hot even in 1967! Gene Hackman(Tommy Del Gaddo)"The Split",'68 was thin young and just starting out and from his performance, you just knew he would be a super star as he is today! I also enjoyed the great musical theme song that was played through out the picture, which was written by a great musician and composer,"QUINCY JONES". If you can catch this movie on TV, it is worth watching, and especially if you like the game of GOLF and all the things that GO ON, in the CLUB HOUSE!