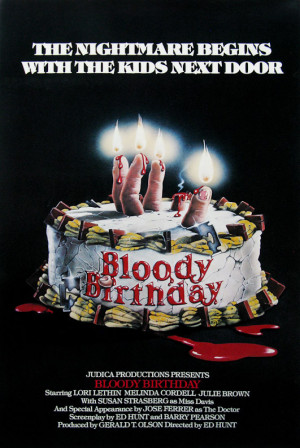 In 1970, three children are born at the height of a total eclipse. Due to the sun and moon blocking Saturn, which controls emotions, they have become heartless killers ten years later, and are able to escape detection because of their youthful and innocent facades. A boy and his teenage sister become endangered when they stumble onto the bloody truth.

In Meadowvale, California, three children, Debbie, Curtis and Steven, were all born during an eclipse. According to their horoscopes, this has left them without emotions. They are now all ten year-olds and engage in a series of fiendish murders of other children and adults. Teenager Joyce Russel is looking after her young brother Timmy while their parents are away when they are targeted by the children. As Joyce tries to stand up against the children, her efforts to tell what is happening are disbelieved by the adults around her.

Review: “This little shocker was made in 1980, and you can really see it, but! It’s not that bad, i will be honest. The film centers around 3 10 year olds, who were born at the horizon of an eclipse. now this has turned them into cold blooded killers, almost from today’s headlines. The next door neighbors (older sister and her little brother), catch on to their ways. And we get to see julie brown (from MTV) naked, this is worth the rental alone. We also get to see, strangulations, arrows through eyes and naked people shot, hope i am not ruining the plot. watch for the poster of van halen, getting shot with bulletholes. check it out….. it is an interesting flick.”