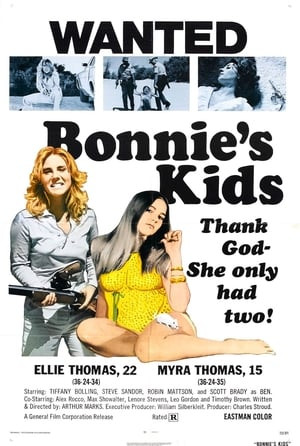 Two rebellious sisters and a crooked P.I. attempt to escape from the girls' mobster uncle with $400,000 in stolen loot, and meet nefarious characters while dodging a bickering pair of enforcers.

Sisters Myra and Ellie have finally had enough of their miserable, dead-end lives. When their stepfather Charley (the titular "Bonnie" being long dead) tried to rape Myra, Ellie ventilates him with a shotgun, and the pair run off to their wealthy uncle's mansion in El Paso. From that point on, the two undergo a transformation in their personalities, and start to enjoy living their lives on the wild side.

I do love a good sleazy seventies crime flick, and Bonnie's Kids is certainly a very good sleazy seventies crime flick! The main reason this film works so well is because everything about it is absolutely spot on - writer-director Arthur Marks creates a real gritty and sleazy atmosphere that fits his plot brilliantly, while lead actresses Tiffany Bolling and Robin Mattson both manage to pull off performances that are sexy and tantalising as well as being deceptive and as far away from 'innocent' as you can get! The film makes best use of its elements and what we end up with is pure drive in gold! The plot focuses on two girls, Ellie and Myra, the daughters of deceased town tramp "Bonnie". After their no good stepfather tries to rape the younger daughter, the older one blows him away with a shotgun and the two daughters decide to go and stay with their only relative, Uncle Ben, in his lavish mansion in El Paso. The two get involved with their new lives, and soon enough the older daughter is asked to run an errand for her uncle, but when a chance to steal a load of money presents itself; she takes it...

The plot of this film is great in that we get a basic premise and from there it's never clear where it's going to go. Arthur Marks' script has plenty going on in it; the main story always revolves around the girls, but there's enough going elsewhere and with other characters to ensure that it's always interesting and the 105 minute runtime is certainly not packed with filler! The film is also good in that it's clearly a product of the time in which it's made - everything about the film clearly sets it in the seventies; the fashions, the music, the cars, houses etc are all exactly what you'd expect from a film like this. There's a real lot of themes that are common in seventies exploitation that made it in too, from sex and shooting to lesbianism and teenage angst. The fact that the film is not predictable is carried on all the way to the end, and the climax really does come as a big surprise and was not what I was expecting! Overall, this might not appeal to all tastes, but for my money, Bonnie's Kids is an out and out drive in classic and should not be missed by anyone who considers themselves a fan of films like this one!

Pretty teen temptress Myra (Robin Mattson) is talking dirty to her boyfriend on the phone when her drunken stepfather walks in and decides to show her what a real man is like. As Myra is being attacked, her big sister Ellie (Tiffany Bolling) appears brandishing a shotgun and gives him both barrels. So begins this gritty slice of sleazy '70s exploitation, which delivers sex, violence and morally dubious characters aplenty as the girls (whose mother was named Bonnie, hence the title) flee their home to start life anew with their uncle Ben, unaware that he is a ruthless crime boss.

As drive-in/grindhouse cinema goes, Bonnie's Kids is tough to beat, ticking off many of the ingredients that avid fans of the genre live for: two gorgeous leads in Bolling and jailbait Mattson, both of whom deliver gratuitous nudity; a large bag of dirty cash to tempt the weak; a pusillanimous private eye led astray by a beautiful woman; a pair of hired goons who provide the film with acts of bloody violence; a smattering of lesbianism; and a wonderfully downbeat ending. It's pretty obvious that Quentin Tarantino is a fan, the film clearly serving as inspiration for Pulp Fiction (Does the name Bonnie sound familiar? Do Ben's interracial hitmen, hired to retrieve a valuable package, remind you of anyone? And what about that Butch/Marcellus-style chance encounter in a store that results in shocking violence?). If, like me and QT, your idea of entertainment is watching reprehensible lowlifes living on the edge, this should fit the bill nicely.

Did Tarantino See This As A Youngster??

This is a thoroughly entertaining 1970's sleazy crime film - where desperate people do desperate things for sex and money. The clothes, the music, the lingo, the hair styles - a great time capsule of the early 70's. The curious thing is the movie has some real interesting quirks to it - one being a "salt and pepper" hit team - white guy, black guy who spend a lot of time walking hallways, sitting in a car, sitting in diners and talking about this and that - very much like Travolta and Jackson in "Pulp Fiction". Now, is THIS film the first to have such a hit team - probably not. But in the theatre midnight movie showing I saw it at - many people were shouting out the "Pulp Fiction" similarities. Hmmmm. Just like many people bring up the jewel robbery in the powerful Asian crime film "City On Fire" as the "inspiration" for the jewel robbery in "Reservoir Dogs". Hmmmm. Anyway, the movie of "Bonnie's Kids" is a blast - good and gritty and Alex Rocco (Moe Green in the Godfather and the Emmy-winning sleazy agent in the short-lived comedy Famous Teddy Z) is the white guy assassin. 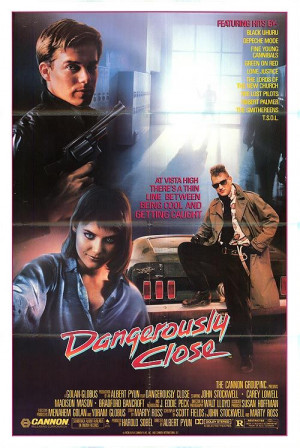