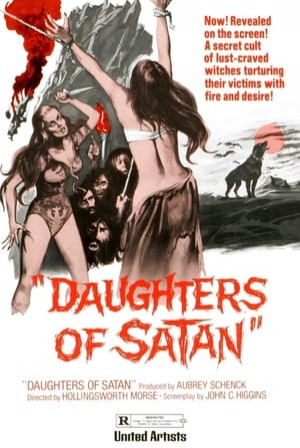 James Robertson buys a painting depicting witches being burned at the stake, one of whom bears an uncanny resemblance to his wife, Chris. Chris, gradually taken over by the personality of the witch in the painting that she resembles, allies herself with two other reincarnated witches to plan James' death, as he proves to be a descendant of the man responsible for the witches' fate.

Twenty-seven year old, pre-Magnum, PI Tom Selleck (Jim Robertson) is an art historian who lives in a spooky house in Manila, The Philippines with young wife, Chris. He finds a painting of three Duarte Coven witches and a dog being burned at the stake circa 1592; Chris is a ringer for witch number two. All of the figures in the painting, (including Nicodemus, the dog) begin to fade; Jim runs to and fro to find answers. Jim beautifully proclaims himself a cat lover when Nicodemus attacks him once too often. When Jim sees another related work (where he is a ringer for the torturer, Sir Diego Roberson, should he be concerned when Chris stops wearing her crucifix?

Robertson (Tom Selleck – Terminal Island) came to the Philippines with his wife, Chris a few months ago. His wife suffers from depression and refers to a local doctor. But no treatments do not help. Once Jim buys an old picture, which depicts the execution of witches in the Middle Ages. Much to his surprise, the witch in the center of the picture as two peas similar to Chris. Jim brings a picture of the house and gives his wife. But he does not even know what evil is introduced into your home …

Review of Daughters of Satan movie: The presence of Tom Selleck alerts you to the fact that this is a mainstream film with all the compromises that suggests. He plays James Robertson, a character who never seems to do very much except drive around in a flashy sports car. One day he buys his wife (played by the lovely Barra Grant) a painting depicting a witch being burnt at the stake, a witch  that bears a strong resemblance to his loved one. Inevitably strange things start to happen, but not strange enough to grab your attention.

The aura of respectability that is conferred when a big studio is involved is briefly shattered when James’ wife is abducted by a cult, strung up topless by her wrists and given a whipping with her tits in full view. Sadly, she only lasts a couple of lashes before giving them the information they demand.  This is exciting as it gets, unless the sight of Tom Selleck shopping does it for you.  There is a twist at the end if you’re still watching, but it isn’t exactly Carrie.