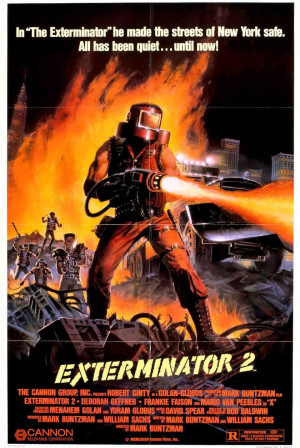 Driving a garbage truck retrofitted with a flame thrower, vigilante John Eastland goes head to head with a gang leader named X (Mario Van Peebles) in a mission to rid New York of outlaws and punks.

This violent follow-up to the sadistic actioner The Exterminator (1980) again features Johnny Eastland (Robert Ginty), a Vietnam vet who is triggered into vengeful killing when his dancer girlfriend (Deborah Geffner) is first badly beaten and permanently crippled and later murdered by a gang of street thugs led by X (Mario Van Peebles).

Johnny dresses up in a special uniform and helmet, grabs a flamethrower, and aided by Be Gee (Frankie R. Faison), a former vet turned garbageman, the two incinerate their way through the rest of the film. Like other Death Wish clones, this film is derivative, violent, and mindless.