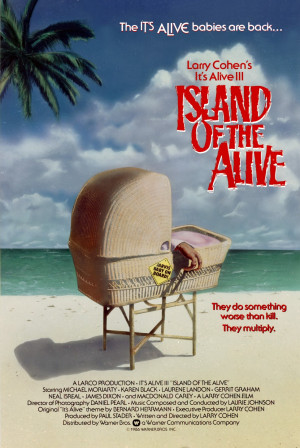 It's Alive III: Island of the Alive

The mutant babies have been placed by court order on a deserted island. Appalled by the cynicism and exploitation of the children by the legal system and the media, the man responsible for them leads an expedition to the island to free them.

Several years after the first two films' events, a woman goes into labor in a cab on a rainy night. Panicked, the cab driver seeks out a police officer to assist in the birth before going to search for a public phone to call an ambulance. While he's away, the woman gives birth to a mutant baby. Recognizing it as a mutant child like those from the prior films, the officer tries to shoot and kill the infant, who reacts by killing the officer and mother. The following day the mutant baby's corpse is found inside a Catholic church, where it dragged itself to die.

The film then cuts to a courtroom, where Stephen Jarvis is pleading for the court to spare his mutant son's life, who he argues acts aggressively because it's reacting to the hostility of the people and chaos surrounding him. The baby breaks out of the cage, but Jarvis calms it, convincing the judge to spare the child and four others like him by quarantining them on a remote deserted island. After the trial, Jarvis is a social pariah, unable to work his former acting job and the child's mother, Ellen, wants to live her own life without him as if she had never given birth. Jarvis soon becomes remarkably bitter, as he can't pay his legal fees and women want nothing to do with him, afraid that he will pass along the mutation through casual touch. Aware that the babies are still alive and that the mutations were a side effect of a medication his pharmaceutical company produced, Cabot and some of his associates travel to the island. They hope to kill the babies to manufacture the drug under a new label, only for the mutant babies to kill and eat the entire party.

Five years later, Jarvis is approached by Lt. Perkins, who tells him that he has been recruited by Dr. Swenson to launch an expedition to the island to study the babies' growth and that he wants Jarvis to accompany them. The trip proves to be disastrous, as only Jarvis and Perkins survive - Perkins has been deserted on the island while Jarvis remains on the boat as their captive as the mutants want to travel to Cape Vale, Florida. While traveling, Jarvis realizes that the babies grew quickly and have reached adulthood, as one of them has given birth to a baby, with the father implied to be Jarvis's son. Jarvis also realizes that the mutants communicate with each other telepathically. He also discerns that the only reason he's still alive is because of the existence of the ship's sailing crew's bodies and because his son has been protecting him. He also realizes that the children are traveling to find Ellen. Eventually, their ship comes across another vessel, at which point Jarvis's son throws his father overboard to save his life, expecting that the ship will pick him up.

When Jarvis awakens, he finds himself held captive in Cuba but manages to convince his captors of his identity and that the mutant children pose a danger to those around them. He also manages to get them to take him back home. Meanwhile, the children have arrived in the United States, where they promptly kill several people who appear to be a threat to either them or Ellen, while also defending a woman being attacked by killing a gang of punks. Ultimately both Jarvis and the mutants find Ellen, upon which point the mutants try to get her to take the child. Initially reluctant, Ellen accepts the child after Jarvis convinces that the mutants looked for her out of love for their child, as they were dying of measles and would be unable to care for the child, and because they strongly instinctually associated her with motherhood. The two accept the child just as its parents die from measles while the final remaining adult mutant distracts the police, allowing Jarvis and Ellen to escape. The film ends with the two of them driving away together with the child, searching for a safe place to raise it.