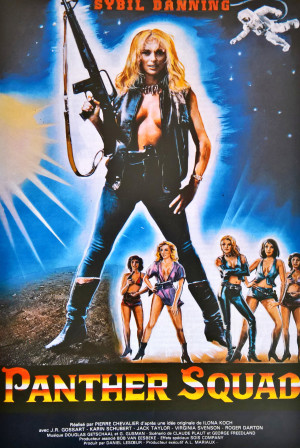 An astronaut has been abducted by a group of environmental terrorists. The New Organization of Nations decides to send a lethal commando "The Panther Squad", composed of sexy female mercenaries to get rid of the terrorists led by Barbara Wims and to free the hostage.

What do you get when legendary exploitation studio Eurocine enlists the arresting presence of Amazonian cult movie goddess Sybil Danning to kick some international terrorist tush? Why, PANTHER SQUAD of course! The coolest and craziest trash action movie of the 1980s!

The blonde, buxom Danning (HOWLING II: YOUR SISTER IS A WEREWOLF, HERCULES) stars as Ilona aka The Panther, a hotter than Hades heroine who packs a punch and looks lethal poured into her barely-there leather outfit. When a famous astronaut is held captive by a group of murderous environmental extremists, world leaders turn to The Panther Squad, a group of vicious (and viciously sexy) female mercenaries to search, rescue…and destroy. Will they succeed? Naturally, and they’ll look sexy doing so!

Directing under his pseudonym Peter Knight, French genre movie machine Pierre Chevalier helms this off-the-wall opus, which also stars the immortal Jack Taylor (FEMALE VAMPIRE), Karin Schubert (EMANUELLE AROUND THE WORLD) and Donald O’Brien (ZOMBIE HOLOCAUST). But all eyes are on Sybil, the greatest special effect in busty, B-movie history! Full Moon is excited to be bringing this rarely seen Eurocine gem back from ’80s oblivion with a crisp new remastered HD transfer. Prime your pistols and join the Panther as she punishes any and all who dare stand in her way!