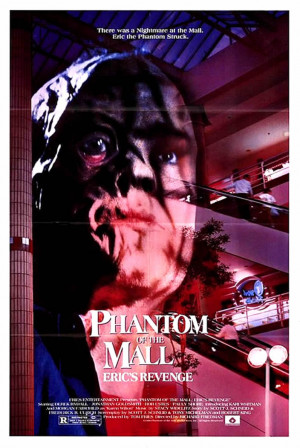 Phantom of the Mall: Eric's Revenge

One year earlier, someone sets fire to a guy name Eric's house with him and his girlfriend Melanie inside, she survives but Eric does not. A year later a horribly burned man is stalking her from the shadows of a new mall that was built on the land where Eric's house once was.

It is the opening of the Midwood Mall. Lurking in the ventilation shafts is a masked Phantom who emerges to kill people. Melody Austin gets a job as a sales assistant in the mall. The Phantom becomes obsessed with Melody, watching her through the security cameras. As she becomes aware of his presence, she realises that this is her former boyfriend Eric Matthews who she believed had been killed in a house fire started by a shady developer. As Eric takes her away to his lair, he plots the concluding movement in his revenge against those who hideously disfigured his face by blowing the mall up.