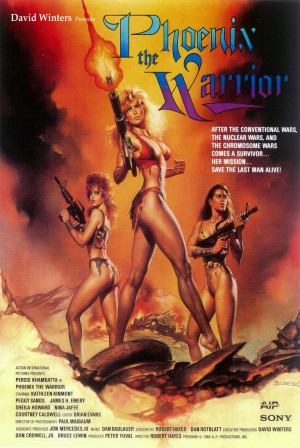 Big hair, big guns, big personalities, and a serious lack of wardrobe. She-Wolves of the Wasteland, a post-apocalyptic story that features women--lots and lots of women--who leave little to the imagination as they battle each other in various junkyards and gravel pits to determine the fate of the entire world.

She Wolves of the Wasteland, Phoenix, a Guerreira, Phoenix the Warrior, Főnix, az amazon, Phoenix

"She-Wolves of the Wasteland" belongs to the "post-nuclear war" movies wave that followed "Mad Max". Provided with a typical 80s disco keyboard soundtrack, its most unusual element is the cast which comprises almost entirely of females. Did I hear anyone complain? No! One tribe lead by the mutant "Reverend Mother" and the warrioress Cobalt (Persis Khambatta from "Star Trek" and "Megaforce") tries to find the (possibly) last male on earth, but he is on the run with Phoenix (gorgeous: Kathleen Kinmont)... What do we get from this movie? Quite a lot of fun, for example there is a mutant tribe whose gospel includes the holy words "Sesamy Street" from a mysterious distant past, and obviously with all the babes around: exploitation with a capital S. These girls are so violent, when they run out of ammo, they pick up swords to cut throats - or even tear each other's hair! Yes, it's silly, but compared to other flicks of the genre that have too many gladiator fights and car races, it's one of the better trash movies around and worth checking out!