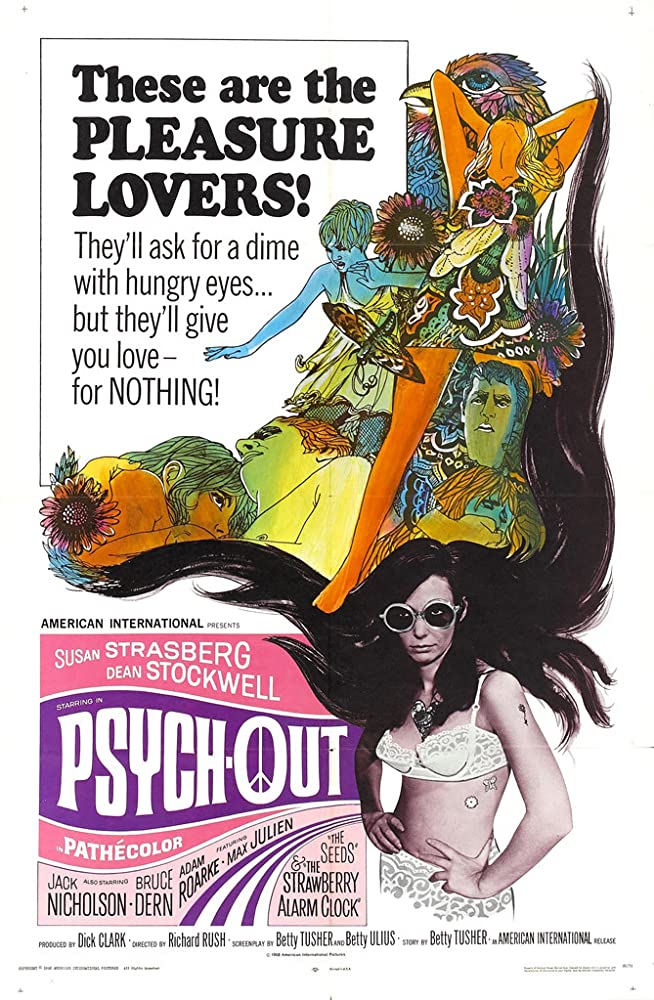 Jenny, a deaf runaway who has just arrived in San Francisco's Haight-Ashbury district to find her long-lost brother, a mysterious bearded sculptor known around town as The Seeker. She falls in with a psychedelic band, Mumblin' Jim, whose members include Stoney, Ben, and Elwood. They hide her from the fuzz in their crash pad, a Victorian house crowded with love beads and necking couples. Mumblin' Jim's truth-seeking friend Dave considers the band's pursuit of success "playing games," but he agrees to help Jennie anyway.

Wickedly good fun from the era of Flower Power

It's a rock band - hippie gang trying to protect a deaf runaway girl while on the search for her missing brother, but instead, they're taking The Trip to nowhere. Director Rush, who gave pony-tailed Nicholson some star treatment in HELL'S ANGELS ON WHEELS, delivers this pretty good view of offbeat, sublime hysteria pertaining to the drug frenzy that popularized late 60s culture. One troubling factor, though: it was made to immoralize society as we once knew it. Just say "wicked", and you'll enjoy this cinematic acid trip that isn't half-bad. RATING: * * 1/2

When I first read the synopsis for Psych-Out, I expected it to be incredibly stupid, but once I watched it I decided otherwise. This film provides a rare look into a time too offen reduced to nostalgic simplicities. A true time capsule, watch and see. NOTE: It is quite embarrassing when Nicholson is miming (on guitar) a bastardized version of Purple Haze, but the scene is enjoyable nonetheless. Great music by Strawberry Alarm Clock and The Seeds (both bands perform live in the film). The STP sequences are fun to watch. Another part is where Elwoood (Max Julian)fights a bunch of garbage gargoyles in a local dump, but since he ate a hit of acid, he sees them as knights and dragons. Bruce Dern plays a good role in this film as 'The Seeker' who is being looked for by his sister Jenny (Susan Strasberg). Dave (Dean Stockwell) is an acid freak and his role is equally effective. But the main treat is seeing Jack Nicholson (as Stoney) with long hair saying 'out of sight' and crashing around in a van with his psychedelic band, Mumblin' Jim. Although not for everyone, this film can be incredibly enjoyable.

If you try and take 'Psych-Out' seriously you're making a big mistake. This is Haight-Ashbury presented by Dick Clark after all! But as 60s camp it's great fun, and dare I say it worth watching more than "real" head movies from the period like 'Chappaqua' and Antonioni's 'Zabriskie Point'. This mightn't be what the 60s were really like, but after watching Mumblin' Jim and fans at the Ballroom, or the happiest funeral ever, music courtesy of garage Gods The Seeds, you'll wish that it was, and that you were there!

A splendid time is guaranteed for all just as long as you stay away from the rednecks at the rubbish dump, avoid playing in the traffic on STP, and nobody doing the dirty dishes. Grooovy baby!

A 17 year old deaf mute (Susan Stasberg!?!) tries to find her brother (Bruce Dern) in 1968 San Franciscos Haight-Ashbury area. A musician (Jack Nicholson) and his friends try to help her.

The plot is unbelievable from the word "go" and, despite location shooting in Haight-Ashbury, this is a very Hollywoodized look at hippies. Everybody is so healthy, friendly, helpful and they live in colorful, spotlessly clean huge houses happily. That was NOT the way it was--any documentary on the 60s could tell you that. Realism aside, this is one of AIP's best pictures.

The dialogue is VERY dated (and hysterically funny) as are the situations, but the film never stops moving, is shot in deep rich color, has good acting (considering) and is never once dull. Check out a most interesting "funeral" in the film and a very funny sex sequence. However, at the end, it gets VERY serious and has a depressing ending. Too bad--it's totally at odds with the rest of the film. Still--well worth seeing.

It also stars Dean Stockwell (who has the best lines) and Garry Marshall (!!!) in a bit as a cop! Produced by Dick Clark!

My name is George Cox and I was the lead singer for the Storybook who recorded the majority of songs for this movie. We were a local San Fernando Valley band who were brought into the production by Ronald Stein and Dick Clark to help produce the music for this movie. It seems that the Strawberry Alarm Clock and the Seeds got most of credit for the music in this movie. My group and I really enjoyed all the recording sessions to produce the music for this soundtrack album. We also enjoyed watching the film once it was produced as it showed the life in San Francisco and Haight-Ashbury as it was in the 60s.

Susan Strasberg plays Jenny Davis, a young woman who runs away from home, and lands in San Francisco. Jenny's looking for her brother, an eccentric artist with a host of problems. Jenny is deaf, and has to struggle to communicate with those around her. She meets a hippie named Stoney, who is the leader of a psychedelic rock band. Stoney is touched by the waifish Jenny's situation, and offers her a place to stay. He also wants to help Jenny locate her brother. But that's easier said than done, especially since violent thugs are after Jenny's brother.

The stellar cast of this movie, makes it the classic that it is. Jack Nicholson as Stoney, is in rare form. Even back when this movie was made, Nicholson's unique brand of screen charisma, was already evident. It's no wonder that he went on to become an acting legend. Bruce Dern also gives a notable performance, as Jenny's brother, Dave. Bruce deftly conveys the manic, electric energy, that radiates from Dave. Susan Strasberg did a good job of portraying the frightened, yet determined urchin, Jenny. But she doesn't shine as brightly as her co-stars do.

The plot of this film is beside the point. It's really a celebration of the 60s counterculture, and the wild lifestyles of it's participants in Haight Ashbury. The stoned hippies, love-ins, psychedelic art and music, etc., were all the main focus of this movie. I was a youngster back in late 60s. So I knew how it was then, and this movie gives an accurate account of that time-period. That era was wild and thrilling, to say the least. I recommend this film, to those that want to see how off-beat the 60s really were. Especially if you're a Jack Nicholson fan.