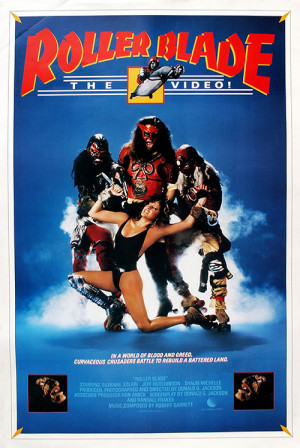 In a futuristic society, rebels fighting against a fascist state are aided by a group of roller-skating nuns called the Bod Sisters.

The distant future. The era of darkness. Desolate land. Through Los Angeles can only move on roller skates – otherwise you will get into the hands of cronies of Doctors Satikoya – Samurai, Umnikov or Thorns. They want to “save the world from eternal good.” To fight with them can only women warriors, united in mystical order. In its struggle for the revival of the Holy Land rollershi use Power Crystal – a legacy of the past centuries. But Dr. Sachiko kidnaps Crystal. Amazons ready to give their lives for the return of the mysterious energy source.

This is the kind of movie that you either love or love to hate. This is a deliberately campy and schlocky zero budget outing and director Jackson has even cast camp movie auteur Fred Olen Ray's young son in this one. It is post-apocalyptic movie where the rulers send out the shakespearian talking skate patrol to police. Nude babes, cheesy effects, deadpan dialog and pure sillyness makes this an irresistable turkey. Roundup your friends and have a big laugh!

Holy rollers!  You can’t say photographer-director Donald G. Jackson isn’t consistent.  The bad acting he allowed in ROLLER BLADE is permitted in this new adventure on skates set in a post-holocaust world where Mother Speed (Abby Dalton) reigns over women warriors (“Go forth,” she proclaims, “and skate the paths of righteousness.”)  This time the wheeled wenches are protecting a psychic virgin from falling into the hands of evil-doers who feed beautiful women to a monster in an energy plant.  Little sense is to be made from Lloyd Strathen’s script (from a Jackson idea), what with tongue-in-cheek characters, exaggerated swordplay and sappy dialogue.  Example:  One woman says “What’s a man like?” and another replies “Like soup on a cold night.”  And yet the direction has a strange kinetic energy and sincerity of purpose, suggesting Jackson is a dedicated schlock film-maker.  You should see at least one of these things—they defy description. Kathleen Kinmont (Phoenix the Warrior), Jack Damon, Elizabeth Kaitan (Necromancer), Rory Calhoun (in a cameo), Norman Alder, Suzanne Solari.