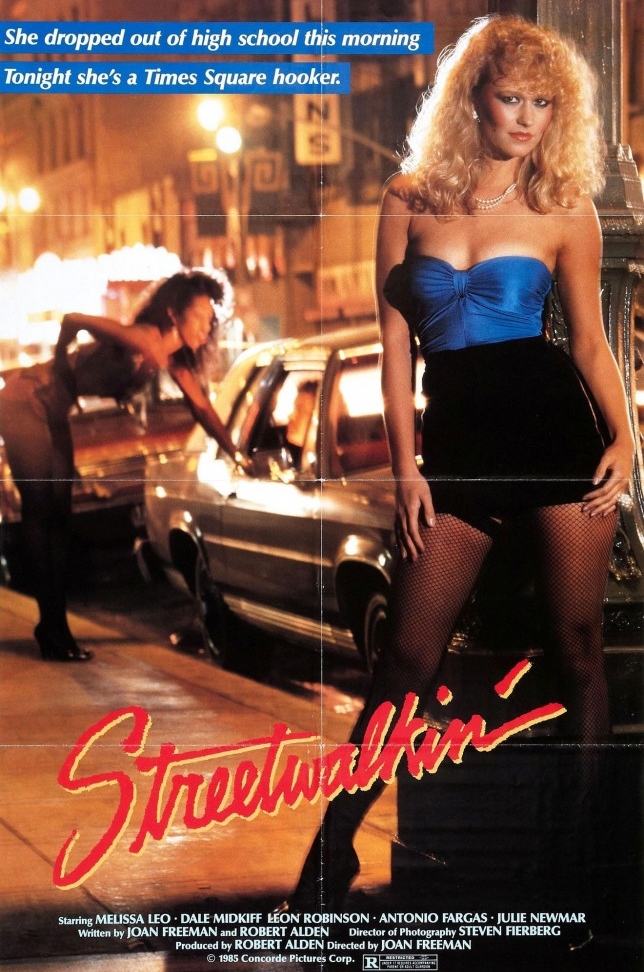 A high school dropout working as a street prostitute spends one night turning tricks and avoiding her emotionally unstable pimp who's starting to turn very violent.

Cookie and her brother run away from their loveless mother in the province and arrive in New York. At the train station Cookie meets the fancy man Duke. With his charm he makes her fall in love with him and soon has her working as a prostitute. However his brutality against her colleagues disgusts her.

This is an enjoyable flick about hookers. But what film about hookers isn’t enjoyable? Not too dissimilar from Vice Squad, Streewalkin’ is an evening in the life of a young hooker running from her killer pimp. It’s got a great cast with Antonio Fargas (Foxy Brown), Leon Robinson, Julie Newmar, Greg Germann, a very young Randall Batinkoff, Dale Midkiff (who starred in Heatwave) and Melissa Leo and her tiny titties.

Here’s what you get:

Personally I find the editorial content suggesting that the life of a hooker is less than fully consensual and glamorous a bit off putting.  Further, the film fails to fully appreciate that it’s hard out here for a pimp, when he tryin’ to get this money for the rent, for the cadillac and gas money spent, will cause whole lot of bitches jumpin’ ship.  So basically I’m just axin’ for a little understanding.  In any event, it’s a gritty, enjoyable drama about life on the streets for a young hooker trying to care for herself and her little brother in a world full of sexual deviants and crazed, jealous, killer pimps.  Good flick and decent commentary to boot.

Teenager Cookie (an excellent and affecting performance by Melissa Leo) runs away from home to escape her abusive stepfather and goes to New York City with her younger brother Tim (a solid portrayal by Randall Batinkoff). Cookie falls under the spell of smooth, but sadistic pimp Duke (well played with frightening conviction by Dale Midkiff), who turns her out as a Times Square hooker. Director Joan Freeman, who also co-wrote the seamy, yet engrossing script with Robert Alden, maintains an appropriately hard and gritty tone throughout, offers a vivid evocation of the Big Apple's grimy red light district underbelly, delivers a handy helping of graphic nudity and perverse sexuality, and stages the tense and exciting climax with real flair and skill. The sound acting from the sturdy cast helps a lot: Antonio Fargas as suave master pimp Finesse, Julie Newmar as tough, sassy, and maternal veteran whore Queen Bee, Leon Robinson as slick rival pimp Jason, Khandi Alexander as the gutsy and enticing Star, Annie Golden as pathetic strung-out junkie Phoebe, and Julie Cohen as the perky Tricia. The startling moments of raw brutal violence pack a pretty mean punch. The funky soundtrack hits the get-down groovy spot (the theme song in particular totally smokes). Steben Fierberg's glittery cinematography gives the picture a sparkling neon glow. The pulsating score by Doug Timm and Matthew Ender throbs to a neat syncopated beat. Good trashy fun.

The Citizen Kane of prostitution films

I recently had the pleasure of viewing this work of art and I was utterly spellbound. Every second of this film felt like a miracle on the screen of my television. By the time the credits rolled, I was breathless. A prime example of perfect casting, the characters went from working the streets of The Big Apple to finding a place in my heart. The plot is everything you could dream of. A high school dropout (Melissa Leo) ventures to New York City with her younger brother and becomes a prostitute. 'Nuff said, great movie. It really is a shame that this film will never be seen on DVD. I would enjoy hearing commentary tracks from director Joan Freeman and co-star Dale Midkiff( best known for his role in Pet Semetary). I put this gem on my personal top ten list; above Titanic and Wizard of Oz. If you are fortunate enough to find this movie in the $1 bin of your local video store, don't hesitate to buy it. This is the Gone With The Wind of 80s sleaze films. You'll laugh, you'll cry, you'll watch it again...