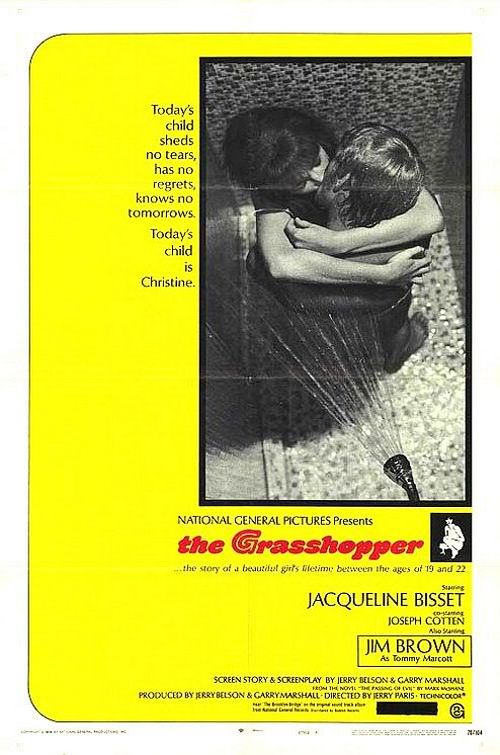 Christine Adams (Jacqueline Bisset), a cheerful 19-year-old from British Columbia, Canada, travels to Los Angeles to be with her fiance, who works there in a bank. When the relationship doesn’t work out, she moves to Las Vegas.

Here’s an overlooked gem from that groovy yesteryear of free love and plenty of it – a compelling, keenly observed character study of a restless, small-town libertine (the luminous young Jacqueline Bisset), an Aquarian age Candide on a three-year odyssey that takes her from wide-eyed innocent to embittered burn-out.  Written by Gary Marshall and the great Jerry Belson (SMILE), THE GRASSHOPPER captures the self-indulgent hedonism and ennui of the ‘60s era with biting wit and nonjudgmental compassion. It also displays La Bisset in various states of boob-baring undress.  Viva la groovy yesteryear!

Wide-eyed nineteen year old Christine Adams decides on a whim to leave her broken family life in small town British Columbia to move to Los Angeles to be with her boyfriend Eddie Molina, who doesn't know she's coming. Christine hopes to start a family with Eddie immediately. But Christine finds that she is restless in her life with Eddie and moves on. From move to move which are always done on a whim, Christine has a similar restless attitude, always dreaming of something better. But she has no real marketable job skills - although she is always thinking about continuing with her schooling in some trade to make a better life for herself - or sense of what working in a traditional type job means. She is able to get by on her looks, which lands her a job as a Las Vegas showgirl. She also goes in and out of relationships - including with Vegas comic Danny Raymond, ex-football player Tommy Marcott who too is trying to find his meaningful niche in life, older businessman Richard Morgan who acts as her sugar daddy, and rock musician Jay Rigney - always dreaming of the perfect relationship situation which never seems to materialize. As such, her life goes into a tailspin. She ultimately lets the world know how she feels life has treated her.

Christine Adams, at 19, leaves her small town in British Columbia to follow her boy-friend to L.A., where he works for a bank, to live with him and have babies. He's not keen on a baby right away, so she gets bored and heads for Las Vegas where she talks her way into a job as a show girl. Friendships sustain her in this day-by-day life, and one of those friendships, with NFL great Tommy Marcott who's now the glorified greeter at a casino, blossoms into a marriage. Tommy loses his job after beating a man who assaults Chris, so they head for L.A. There tragedy strikes, and there's no place left for her but Vegas and prostitution. Are redemption and fulfillment possible on the Strip?

I sat here in amazement looking at these scenes and wondering how depraved the imagination of these people had to be. And it's Garry Marshall! Holy crap.

The entire movie can be summed up by saying that She bangs her way into the slammer.

Quite interesting 1970 movie. Jacqueline Bisset is very, very good, the movie itself is very dated, but also fairly risque for the time. It also presented an interracial marriage, drugs and prostitution, but in a "70s" way. The acting is pretty bad, except for Ms. Bisset and the music, especially the lyrics, is so bad, it is campy good.