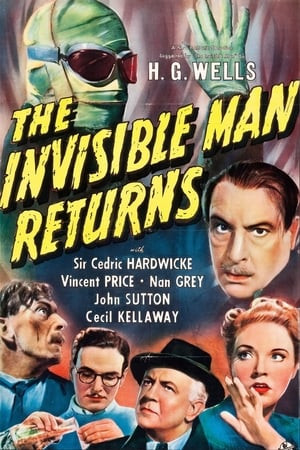 The owner of a coal mining operation, falsely imprisoned for fratricide, takes a drug to make him invisible, despite its side effect: gradual madness.

Geoffrey Radcliffe, the wealthy owner of a coal mining operation, is running out of time. In two hours, he is set to be executed for the murder of his brother, a murder he did not commit. His fiancée, Helen Manson, is frantic. Geoffrey's cousin, Richard Cobb, tells her that he has done everything he can. Geoffrey's only hope is his friend, Dr. Frank Griffin. Griffin's late brother once discovered a secret drug that makes a human being invisible. The only trouble is, it also turns its subject mad. But now Geoffrey, Helen and Dr. Griffin have no other choice. Griffin visits Geoffrey at the prison and administers the drug. Soon Geoffrey, made invisible, is able to escape. As the wily Inspector Sampson of Scotland Yard searches for the escaped convict, Griffin frantically searches for an antidote and Geoffrey frantically searches for the real killer. Time is short. Geoffrey is slowly but surely going insane.

Direct Sequel to "The Invisible Man" stars Vincent Price as Geoffrey Radcliffe, owner of a coal mining operation that is framed for the murder of his brother. His friend Dr. Frank Griffin(brother of the original Invisible Man) uses the same serum to render Geoffrey invisible, in order to escape the gallows and find the real murderer. Nan Grey plays Geoffrey's girlfriend Helen. They both must watch him carefully, as he may go insane like Frank's brother did, since that flaw in the serum hasn't been fixed yet, and indeed the symptoms turn up before long... Excellent continuation of the story has fine acting and atmosphere, with a smart script that cleverly references the first film without repeating it. Identity of the real killer may be obvious, but film is briskly directed by Joe May, and remains quite memorable.

"The Invisible Man Returns" is a solid film in its own right. I remember seeing this back in the early 1990s, not long after having seen the 1933 classic.

Vincent Price is brilliantly cast as the main character - his voice already becoming distinctive. Cedric Hardwicke is a good if rather emotionally detached villain.

The plot is a very good one but the running time is a bit too long, by about 10 minutes.

Vincent Price portrays a man who deliberately renders himself invisible, so as to locate and expose the perpetrators of a crime that implicated his innocent brother.

This is a very scary movie.

This is a really scary movie. it has a great story line. It also has great acting. It is one of the scariest movies ever. The Invisible man is better. So The Revenge of the Invisible man is also better. But still this is better then 6.6. This is a 9 out of 10. 6.6 is underrating it.

A Great Sequel, See For Yourself

A very good sequel, except even the great Vincent Price himself cannot match the diabolical sinister vibe of Claude Rains in the original. It does deliver more memorable invisible moments and has a slight connection to the first movie - John Sutton plays the scientist brother of Jack Griffin. A worthy follow up and definitely worth seeing, pun intended!

A Sequel Worth Watching

Dr. Frank Griffin, is the brother of Dr. Jack Griffin (Rains). Geoffrey Radcliffe (Price) has been framed for the murder of Jack and is sentenced to death by hanging. Dr. Frank Griffin is a good friend of Geoffrey's and helps him to escape prison with invisibility. Can Radcliffe prove his innocence with the police hot on his trail? Can Dr. Griffin find an antidote to help Geoffrey before he goes completely insane?

Yes the story and casting in this sequel is great - just as good as the original 'Invisible Man (1933)' with Claude Rains. In 'The Invisible Man Returns (1940)' is it the late great Vincent Price who plays Geoffrey Radcliffe, the Invisible Man.

This is a sequel worth watching. Just like the original film, there is drama sprinkled with comedy - quite enjoyable to watch.

Suspected this would be a really dumb movie but it actually ended up being very good. vincent price is very good in this. there is a very good story and actually some good old scary part.

An invisible man sequel worth seeing

It took Universal Studios seven years to produce this sequel to The Invisible Man, but in some regards, it was worth the wait. Geoffrey Radcliffe (Vincent Price) is an innocent man condemned to death for a murder he didn't commit. At the last minute, Radcliffe's gal pal, Helen (Nan Grey), and the friendly mad doctor, Frank Griffin (John Sutton), decide the only way to save Radcliffe is by injecting him with the invisibility serum invented by Jack Griffin. Radcliffe's invisibility enables him to escape the gallows and easily elude the police led by the wily Inspector Sampson (Cecil Kelloway). Radcliffe figures out the identity of the murderer but his behavior soon borders on madness, unsettling Dr. Griffin and Helen. Should they continue to aid Radcliffe or rat him out to the constabulary? Will Radcliffe remain sane long enough to clear his name or will the law have to gun him down like his phantom predecessor, Jack Griffin?

This is a real rarity among sequels in that it is nearly as good as the original. It's one of my favorites in this genre. The story moves along briskly, features some intriguing scenes, and offers some occasional humor. The acting is solid. The special effects though primitive by today's standards are still effective. That doesn't mean it is without it share of faults. Chief among them is why they didn't inject Radcliffe earlier instead of waiting till the day of his execution? Or better yet, inject Helen, so she might solve the crime. Speaking of solving the crime, Radcliffe uncovers the real murderer's identity much too easily. Still, I would love to see Universal Studios remake this someday with a woman as the unseen protagonist/fugitive-Thandie Newton would be my choice. But, knowing Universal Studios, I probably couldn't get that lucky.

Here's an example of a sequel done right

Almost ten years ago I've watched "The invisible man" (1933) for the first time and it scared the hell out of me with its great visuals (even for its time) and the maniacal character of Griffin played stupendously by Claude Rains. But as almost every successful picture of any period in cinema history it spawned a sequel that saw the light of day seven years later. I have only recently found out about it and there was no chance I could skip on it.

"The invisible man returns" tells a somewhat different story from the one told in the original only this time we get to see the psychological transformation of the character who turned invisible. Vincent Price played splendidly, although we mostly hear his character's voice - but that was one of the things Mr Price was famous for and great at - his distinctive deep voice that can be both soothing and dreadfully scary at the same time. Fantastic actor that deserves all the credit there is.

Vincent plays a person convicted of a murder he didn't commit but just in time before the execution he gets the help of Dr. Griffin's brother who had kept the formula of invisibility and so he escapes to find the real murderer. What differs the sequel from the original is that in the 1933 film we got to know the invisible man when he was already stark raving mad; he hadn't looked for the cure because why would you look for a cure for divinity? This time around though we get to see an ordinary man taking in this divinity and dealing with it that showed far more depth to the character and the whole story in general.

Personally I hate sequels when they're done poorly and out of greed for more money only but "The invisible man returns" is a fine example of a sequel not only worthy of its predecessor but which also expands on its universe, gives answers to the questions left unanswered and shows a totally different look at the foreknown ideas.

Geoffrey Radcliffe (the always excellent Vincent Price) gets sentenced to death by hanging after he's framed for the murder of his brother. Desperate to clear his name before it's too late, Radcliffe takes an experimental drug that makes him invisible so he can find the real killer only to discover that said drug also causes him to go insane.