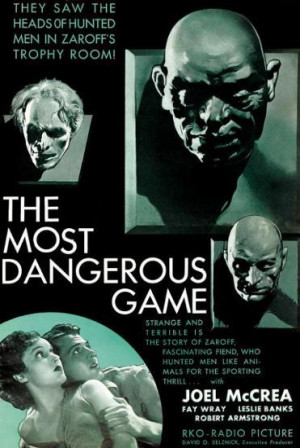 The Most Dangerous Game

When legendary hunter Bob Rainsford is shipwrecked on the perilous reefs surrounding a mysterious island, he finds himself the guest of the reclusive and eccentric Count Zaroff. While he is very gracious at first, Zaroff eventually forces Rainsford and two other shipwreck survivors, brother and sister Eve and Martin Towbridge, to participate in a sadistic game of cat and mouse in which they are the prey and he is the hunter.

After their luxury cabin cruiser crashes on a reef, Bob Rainesford finds himself washed ashore on a remote island. He finds a fortress-like house and the owner, Count Zaroff, seems to be quite welcoming. Apart from Zaroff's servant Ivan, the only other people present are Eve Trowbridge and her brother Martin, also survivors of their own shipwreck. Other survivors are missing however and Bob soon learns why: Zaroff releases them onto his jungle island and them hunts them down and kills them.

"The Most Dangerous Game" is a surprisingly good little thriller that runs just over an hour. It was made the year before "King Kong" by many of the same people that were involved that classic. In fact many of the "run through the jungle" scenes are very similar to those in the later film.

"The Most Dangerous Game" of 1932 is a masterpiece the production of which largely included the same team as one of the most famous films in history, "King Kong" (1933), and while this film does not reach the same level of fame, it easily is an equally impressive milestone and maybe one of the most exciting films ever brought to screen. Adapted from Richard Connel's story of the same name and directed by Irving Pichel and Ernest B. Schoedsack (who also co-directed "King Kong"), "The Most Dangerous Game" simply is an overwhelming cinematic experience in all aspects: exceptionally filmed in fantastic settings, this film is an incredibly suspenseful thriller with a genuinely macabre premise, that is pioneering in its effects and action sequences and, probably most importantly, it introduces one of the most memorable villains ever in cinema, the demented hunter. This demented hunting enthusiast is Count Zaroff, and while the story has often be re-filmed, Leslie Banks' diabolical Count Zaroff in this film remains cinema's most memorable 'Mad Hunter' (and one of the all-time greatest villains) to this day.

After surviving a shipwreck, famed hunter and hunting-book author Bob Rainsford (Joel McCrea) strands on a remote island where the Russian Count Zaroff welcomes him into his eerie mansion. After Bob is introduced to fellow castaways, the beautiful Eve (Fay Wray) and her drunken brother, it turns out that Zaroff is a fellow hunting enthusiast. What Bob doesn't know, however, is that Zaroff prefers to hunt for a very particular kind of 'game'...

This film simply is amazing in all regards. As said above, Zaroff is one of the greatest villains in cinema history. Villains are usually more interesting than heroes, especially in classic 30s cinema. Yet this film also has an interesting hero, greatly portrayed by Western star Joel McCrea. Bob Rainsford is an early form of the action hero, so the film's character as a milestone even includes the hero. Leslie Banks still steals the show as Count Zaroff, though. Banks is brilliantly sinister in the role of the insane hunting enthusiast, whose macabre hobby is the hunting of humans. Zaroff is so dedicated to the hunting-sport that he cannot understand Rainsford's abhorrence for the idea of hunting human beings. The Count's dedication is manifested in unforgettably creepy speeches. At the same time, he is wonderfully cynical, sarcastically repeating what others have said. Fay Wray's female leading character may seem extremely defenseless and dependent on male help by today's standards; on must keep in mind that this was made in the 30s, however, and Miss Wray is lovable and very beautiful. The film is extremely fast-paced and exciting and does not include a single length. Maybe more than any other film from its time, "The Most Dangerous Game" offers non-stop thrills paired with some of the most remarkable action sequences of its time. The shark-sequence in the beginning and the breathtaking chase near the end are just two examples for this. Some of the settings were re-used for "King Kong" a year later, and they also form the perfect scenery for this brilliant film. In a nutshell: This film is as memorable as its villain. One of the most influential classics of the 30s and simultaneously one of the most exciting films ever made, "The Most Dangerous Game" is a sensational masterpiece that everyone even remotely interested in cinema MUST see! Is there a higher rating than 10 out of 10?

When the Hunter is the Hunted!

This is a must see classic for all who love classic films. In a time when big game sport was the top most sport for the elite this movie was ahead of its time by giving audiences the view of the hunted. The question on the boat asking how you would feel if you were the animal being hunted says it all. If you don't know what the movie is about you would venture at this point to guess that it is about a crazed man who has lost the thrill of hunting animals so he takes it to another level by hunting people. He sets up traps in the sea to catch his prey, like a true hunter. Then game on! I would love to see this gem remade... I'm curious how different the public would react since big game hunting is now so controversial.

Stills holds up as a classic adventure story

I remember our 8th grade teacher reading the original short story "The Most Dangerous Game" to us, and being stunned at how great it was... especially the ending. It's a powerful story, and has been told and retold in movie forms for decades...but I never had the chance to see the original movie adaptation - owing to its "lost" status and failure to be shown on cable or movie channels. But recently I saw a used DVD in a bookstore and it was only four bucks. And I was still curious - not only about the movie itself, but about Joel McCrea and Fay Wray...so I picked it up.

My investment was rewarded. I got to see a nice, tight little thriller with some pretty sharp performances by the three main actors and a screenplay that stayed true to the spirit of the story. Leslie Banks (the Count) had just the right approach for the role - he could play suave and sinister, and he could also chew the scenery without embarrassment or restraint; somehow it added up to a memorable performance that I felt privileged to see.

Fay Wray was also a pleasant surprise - stuck within the familiar conventions of the time, she was still awfully good at the role - dramatic without being hammy or affected. Joel McCrea, on the other hand, was just a typical stalwart good guy, but he got the job done.

In a lesser directors' hands, this movie might have been terribly corny, but this guy knew what to emphasize and what to leave out. He added a credibility to the hysterics of the plot that helps the viewer buy into the proceedings. It's just a wonderful job of directing that frames the story just right without calling undue attention to itself. Having sat through a bunch of movies directed by people who usually make MTV music videos, I found this restraint quite admirable.

If you have have the chance to see the "original" somewhere, and you have any patience for the conventions of older movies, you'll enjoy this one.

A beautiful mix of adventure and horror

A sort of prelude to King Kong (1933), The Most Dangerous Game (1932) is one of the most exciting and memorable adventures of 1930s cinema. It contains everything people love about pre-code Hollywood with its no holds barred action and sexually charged atmosphere, and it looks forward to Kong with its exotic adventure.

Joel McCrea and Fay Wray are absolutely gorgeous and admirable as the leads and Noble Johnson also does good with the small role of Ivan, Zaroff's mute henchman, but it is Leslie Banks as the disturbed Count Zaroff who remains with you after the credits roll. He excellently portrays the character's insanity and psychological/sexual obsessions. He's one of my favorite movie villains ever.

Modern audiences will likely mock the jungle sets, but honestly that adds to the demented nightmarish feel of the movie. The whole thing is drenched with dread and violence, giving the film the feel of a horror movie. The chase scenes in the jungle are like something out of a bad dream; the frantic Max Steiner score and cinematography really amp up the tension.

All in all, an excellent underrated film. A must see for lovers of 1930s Hollywood.

When you play the most dangerous game, you play to win!

American author and big game hunter Robert Rainsford is aboard the pleasure yacht of a friend en route to South America to hunt jaguars, having just returned from hunting tigers in India. One of the other passengers, a doctor, points out that animals who kill to survive are considered savage, whereas humans, who kill purely for sport, are considered civilized. To emphasize his point, he asks Rainsford whether he would trade places with the tiger he killed. A bemused Rainsford merely says, "There's two kinds of people in this world; the hunters and the hunted, and I'm a hunter." Suddenly the yacht hits some submerged rocks and sinks. Only Rainsford and the ship's captain survive, but soon a shark eats the captain. Rainsford swims desperately to a nearby island and heads inland, where he discovers a large mansion. The house turns out to belong to the mysterious Count Zaroff, who, having read Rainsford's books, eagerly welcomes his unexpected guest.

He introduces Rainsford to the other people staying with him, Eve Trowbridge and her alcoholic brother Martin. Hunting is Count Zaroff's one and only passion in life. But hunting animals has come to bore him, and he has found a new prey. Rainsford and Eve discover just what that prey is when Martin disappears and, searching for him, the two discover Zaroff's "trophy room" filled with human heads mounted on the wall or in jars! Zaroff, catching them, confirms he does indeed hunt humans, and when Rainsford refuses to see eye to eye with the Count, Zaroff vows that the American will be his next quarry. Now Rainsford will finally know what it is like to be the tiger! Based on Richard Connell's fantastic short story of the same name, The Most Dangerous Game is a wonderful adventure movie that more than holds up today thanks to wonderful acting, a great villain, and most importantly, the action sequences! There's a really great, lengthy foot chase through the jungles of the island towards the end, with Rainsford and Eve pursued by Zaroff's bloodthirsty hunting dogs, and, at the climax, Rainsford has a really good fistfight with some of Zaroff's men (watch for the part where he breaks a guy's back!).

The Eve Trowbridge character wasn't in Connell's short story, but her inclusion here isn't at all distracting, as Fay Wray makes her more than a shoehorned-in love interest. Other changes, including Rainsford's first name (it's "Sanger" in the story) and Zaroff's title (he's a general in the story) are minor and easily overlooked. The movie is faithful to, and expands on, Connell's story.