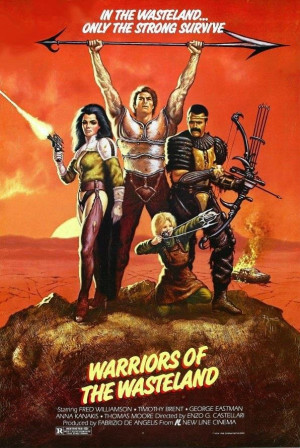 The New Barbarians: Warriors of the Wasteland

The year is 2019 in a post-apocalyptic future, a group of weary survivors is faced with a relentless onslaught from a gang of roving bandits. Into this conflict comes two men, rivals by nature, but forced to take the same side against a common foe. The survival of the human race may very well come down to the outcome of this battle!

Warriors of the Wasteland is one of the greatest worst films I’ve seen, and I’ve seen a lot of bad films. This post-apocalyptic low-budget romp has it all: A homosexual death cult that navigates the wasteland in 20 horsepower go-carts, looking for things to kill! A dashing lone wolf survivor who maintains a rather ambiguous relationship with a prepubescent boy (who also happens to be the local go-to auto mechanic)! Former NFL star Fred Williamson, who’s totally sweet archery skills are second only to his arsenal of exploding arrowheads!!! Add to all of this a hot and vulnerable female lead, a cheesy electronic score, and a bunch of awesome monologues by the leader of the bad guys (“There is only one faith! One ecstasy! DEATH!!!”), and you got one hell of a good time! Take it from a true connoisseur of crap: this movie is worth the low price. Best enjoyed with a few beers and a sense of humor.