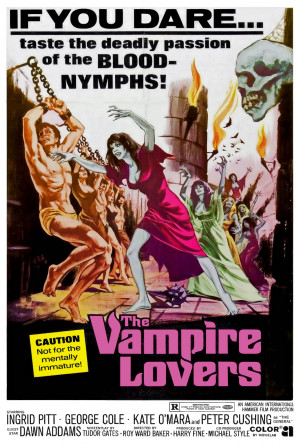 In the heart of Styria the Karnstein Family, even after their mortal deaths, rise from their tombs spreading evil in the countryside in their lust for fresh blood. Baron Hartog whose family are all victims of Karnstein vampirism, opens their graves and drives a stake through their diabolical hearts. One grave he cannot locate is that of the legendary beautiful Mircalla Karnstein. Years of peace follow that grisly night until Mircalla reappears to avenge her family's decimation and satisfy her desire for blood.

In mid-18th century Styria, a beautiful blonde (Kirsten Lindholm) in a diaphanous gown materializes from a misty graveyard. Encountering the Baron Hartog (Douglas Wilmer), a vampire hunter out to avenge the death of his sister, the girl is identified as a vampire and decapitated. Decades later in 1790, a dark-haired woman leaves her daughter Marcilla (Ingrid Pitt) in the care of General Spielsdorf (Peter Cushing) and his family in Styria. Marcilla quickly befriends the General's niece, Laura (Pippa Steel). Laura subsequently suffers nightmares that she is being attacked, and dies of a gradual sickness; whereupon Marcilla departs.

Faking a carriage breakdown, Marcilla's mother leaves her (now using the alias 'Carmilla') at the residence of a Mr. Morton, where Carmilla befriends and seduces Morton's daughter Emma (Madeline Smith). Thereafter, Emma suffers nightmares of penetration on her heart, and her breasts shows tiny wounds. Emma's governess, Mademoiselle Perrodot (Kate O'Mara), becomes Carmilla's accomplice. The butler and a doctor suspect them; but Carmilla kills each one. A mysterious man in black watches events from a distance, smiling (his presence is never explained). Having killed the butler, Carmilla takes Emma prisoner and departs. When Mademoiselle Perrodot begs Carmilla to take her too, Carmilla kills her. Emma is rescued by a young man named Carl (Jon Finch), and Carmilla flees to her ancestral castle, now a ruin. All this coincides with the arrival of the General, who brings a now-aged Baron Hartog. They find Carmilla's grave, which reveals that her true name is Mircalla Karnstien, where the General forces a stake into Carmilla's heart and cuts off her head. Thereupon, Carmilla's portrait on the wall shows a fanged skeleton instead of a beautiful young woman.