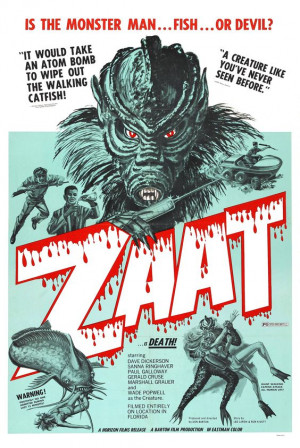 A mad scientist unleashes his master plan: to transform himself into a mutated walking catfish, and gain revenge on those who have spurned him. His plans go wrong, and he becomes tempted to kidnap a nubile young woman to similarly transform her so that he can breed.

Blood Waters of Dr. Z, Legend of the Zaat Monster, Hydra, Attack of the Swamp Creatures

In his laboratory, mad scientist Dr. Kurt Leopold (Marshall Grauer) contemplates his former colleagues' derision for his "formula", "ZaAt", a compound that can transform humans into sea creature hybrids. He injects himself with the serum and immerses himself in a tank connected to an array of equipment, emerging as a catfish-like monster (Wade Popwell). In his new form, Leopold releases walking catfish around the town's lakes and river and releases "Zaat" into the local water supply, rendering many of the townspeople ill. All the while Sheriff Lou Krantz (Paul Galloway) and marine biologist Rex Baker (Gerald Cruse) investigate the strange happenings with the local catfish and the waterways.

Leopold later turns his attention to killing the colleagues that scoffed at his work. He first kills former colleague Maxson and his family while fishing on a boat. He then kills his associate Ewing in his home. With his two former partners deceased, Leopold returns to the lake where a girl is camping and kidnaps her. Taking her back to his lab, the doctor straps her down in a mesh basket next to the large tank of water, with the intention to make her his mate. He repeats the process he administered to himself on the girl. However, in her struggle, the equipment malfunctions and her corpse, partially transformed, is pulled from the tank.

Baffled by the deaths, Rex contacts an organization known as INPIT, which sends scientists Martha Walsh (Sanna Ringhaver) and Walker Stevens (Dave Dickerson) to the town. While out searching for Leopold, Lou comes across a small group of youths playing religious folk music. After one of the youths finishes leading the group in a song, Lou places them all in the town's jail, for their own protection.

Leopold attempts to kidnap another mate, Martha. Leopold grabs her while the others are out hunting for him. Leopold heads towards his lab, followed by Walker, who has picked up Leopold's radioactive trail. While in pursuit, Walker gets bitten by a snake. The doctor arrives at the lab with Martha, where Rex and Lou happen to be searching. A fight ensues and Leopold kills them. He injects Martha with "Zaat", readies her to be dunked into the tank and makes his getaway with canisters of the compound. Martha's transformation does not go as planned, and she is saved from the tank by a dying Rex, although she appears to be in a trance and immediately follows Leopold into the sea.