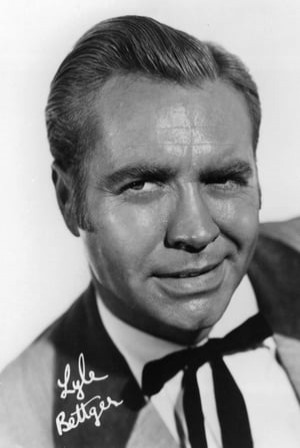 Lyle S. Bettger (February 13, 1915 – September 24, 2003) was a character actor known most for his Hollywood roles from the 1950s, typically portraying villains. He is perhaps most recognisable as the wrathfully jealous elephant handler Klaus from the Oscar winning film The Greatest Show on Earth (1952).

Born in Philadelphia, Pennsylvania, Lyle was the son of Frank Bettger, who was an infielder for the St Louis Cardinals. An enthusiastic fan of cinema, Lyle left school in his late teens with the ambition of becoming an actor.

Bettger graduated from the American Academy of Dramatic Arts in New York. His theatrical debut was in Brother Rat at the Biltmore Theatre in New York City in 1936. After a period languishing in small-time theatre he landed the lead role in the Broadway production of The Flying Gerardos in 1940. When Paramount sent a talent scout to see the show, Bettger was signed on a three-year contract.

Bettger's movie career began when he was cast as the lead in the film noir No Man of Her Own (1950). He soon became a regular on the set of Westerns such as Denver and Rio Grande (1952), The Great Sioux Uprising (1953), Drums Across the River (1954), The Lone Ranger (1956) and Gunfight at the O.K. Corral (1957). Lyle developed a reputation for playing the bad guy and excelled in villainous roles such as the menacing Joe Beacom in Union Station (1950) and the cold-blooded Nazi Chief Officer Kirchner in The Sea Chase (1955).

Bettger also made many appearances in dramatic roles on television, starring in the 1957 series The Court of Last Resort as well as guesting on Hawaii Five-O, Rawhide, The Rifleman, Bonanza and The Time Tunnel.

Lyle was married to Mary Rolfe (1940–1996) until her death. They had three children: Lyle Jr., Frank and Paula. He was also survived by a sister, Lee Morgan.

Description above from the Wikipedia article Lyle Bettger, licensed under CC-BY-SA, full list of contributors on Wikipedia.