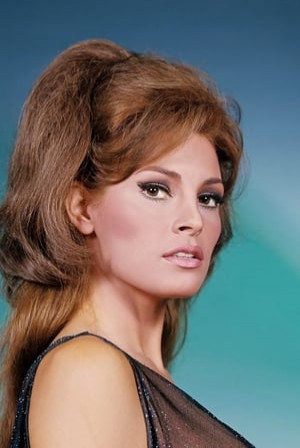 More a sex goddess than an actress, the statuesque Raquel Welch was one of the most popular celebrities of the 1960s and 1970s. While she appeared in dozens of films, they earned little notice, her success depending almost exclusively on her stature as a buxom pin-up. Born Raquel Tejada on September 5, 1940, in Chicago, she began taking dancing lessons as a child and by her teens was already winning beauty contests. At the age of 18, she married high school sweetheart James Welch; the couple had two children before divorcing in 1961. After working in Dallas, TX, as a waitress and model, Welch relocated to Hollywood in 1963; within three days, she had already landed a manager, Patrick Curtis, and soon they formed a promotions company, Curtwell Enterprises. After appearing in Life magazine in a revealing bikini, she began working on the ABC series Hollywood Palace, and in 1964 made her feature debut with an unbilled appearance in the Elvis Presley vehicle Roustabout. Welch next appeared as a prostitute in 1964's A House Is Not a Home, followed by another uncredited appearance a year later in Do Not Disturb. In 1965, she scored her first lead role in the pop musical A Swingin' Summer, resulting in a contract with 20th Century Fox, which cast her in the sci-fi hit Fantastic Voyage before loaning her to the British horror studio Hammer. There she starred in a 1967 remake of One Million Years B.C.; clad in little more than strategically placed strips of fur, Welch's publicity stills appeared everywhere, and she became a major sex symbol -- still, few went to actually see the movie itself. Despite the publicity, Fox was clearly wary of her talents, and did not ask her to return to Hollywood; instead she remained in Europe, starring with Edward G. Robinson and Vittorio de Sica in 1968's The Biggest Bundle of Them All and with Monica Vitti and Claudia Cardinale in Le Fate. While in Paris, Welch and manager Curtis married, issuing a series of provocative wedding night publicity photos.

After appearing as Lust incarnate in Stanley Donen's seven-deadly-sins comedy Bedazzled, Welch finally returned to the U.S. Fox used her judiciously in pictures like the 1968 James Stewart Western Bandolero! and the Frank Sinatra mystery Lady in Cement. Following in 1969 was 100 Rifles, a controversial Western which paired Welch with Jim Brown, and a year later she earned her first real starring role in the disastrous Myra Breckenridge. Her situation was unusual; she was certainly a star and a household name, yet few people ever went to see her movies -- neither 1971's Hannie Caulder nor the following year's Fuzz did anything to alter the dilemma, and when the 1973 roller-derby melodrama Kansas City Bomber also tanked at the box office, Welch divorced Curtis and returned to Europe to appear in Bluebeard. While both 1973's The Three Musketeers and its sequel The Four Musketeers were well received, she earned little credit for their success, and when the 1976 black comedy Mother, Jugs and Speed failed, Hollywood largely washed their hands of her.

Welch instead turned to nightclubs, concert stages, and television; she also continued making films in Europe, including 1977's The Prince and the Pauper and L' Animal, co-starring Jean-Paul Belmondo. In 1980, she was tapped to star in Cannery Row, but was fired a month into production; she filed suit against MGM for damages, and was awarded 11 million dollars. Welch spent the

entirety of the 1980s away from theaters, focusing primarily on television productions like 1982's The Legend of Walks Far Woman and 1987's Right to Die, in which she delivered one of her strongest performances as a woman suffering from Lou Gehrig's disease. After an absence of over a decade, in 1994 Welch returned to cinema in the comedy The Naked Gun 33 1/3: The Final Insult.

Throughout the decade, she also made a number of infomercials and exercise videos, and in 1995 also starred in the short-lived nighttime soap opera CPW. In 1997, she took over for Julie Andrews in the troubled Broadway musical Victor/Victoria, which closed less than a month after Welch's debut performance. ~ Jason Ankeny, Rovi