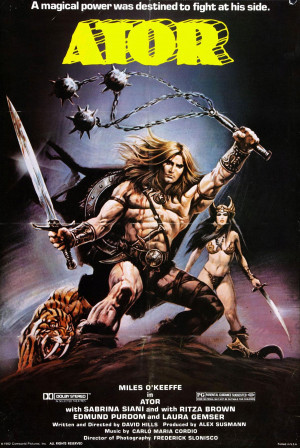 The son of Torren learns of his heritage, goes to avenge the deaths of his fellow villagers, and rescue his sister/love interest from the evil Dakkar and his spider cult. Ator battles giant spiders, swordsmen cloaked in shadow, re-animated dead warriors, and horribly hideous witches.

As the film opens, a baby named Ator is born with a birthmark that signals he will someday destroy the Spider Cult which currently holds power over the land. Fearing this prophecy, the leader of the cult —High Priest of The Ancient One, Dakkar (Dakar)— attempts to kill the baby. Baby Ator's birthmark is covered up, however, and he is whisked off to a village far away where he is given to a couple to raise as their own. Years later, Ator (O'Keefe), now in love with his sister Sunya (Brown), asks his father for permission to marry her. Ator's father reveals to Ator that he is adopted, and can therefore marry Sunya if he likes. On the day of their wedding, the village is raided by the Spider Cult's soldiers and several women are taken, including Ator's new bride.

After pursuing the soldiers, Ator soon finds himself training with Griba, a warrior who is an enemy of The Ancient One, and also the person who whisked him away at his birth. Griba disappears, though, after which Ator is kidnapped by Amazons, nearly seduced by a witch, and undergoes a quest to retrieve a magical mirrored shield. While kidnapped by the Amazons, Ator is "won" by Roon (Siani), a fierce blonde thief whom he helped earlier in the film. Roon is enamored with Ator, so she decides to flee with him and assist him during his quest. Ator is successful in obtaining the mirror, then uses it to fight and defeat Dakkar. His victory is muddied by the revelation that Griba is actually Dakkar's predecessor, and had trained Ator so that he could retake his position as High Priest.

Ator defeats Griba, however, leaving him to be devoured by the offspring of The Ancient One, a giant spider which dwells within the temple. To ensure that the cult does not return, Ator then provokes and kills The Ancient One itself. Afterwards, with Roon having perished while infiltrating the temple, Ator and Sunya head back to their village, presumably to live in peace together.