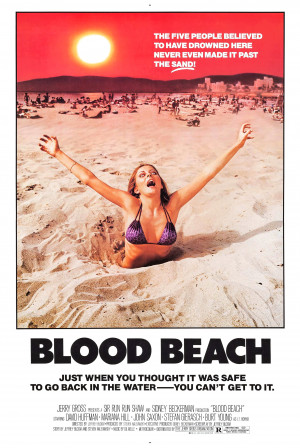 Something or someone is attacking people one by one on the beach. Some of them are mutilated, but most of them are sucked into the sand, disappearing without a trace. What is the creature responsible? Where does it live, and where did it come from? And is there any chance of it reproducing? Meanwhile, David Huffman and Mariana Hill are once-almost-married old friends, reunited over the death of her mother on the beach, and searching for clues in the abandoned buildings where they used to play when they were young.

In the opening scene, a woman named Ruth is walking her dog on Los Angeles, California's Venice Beach, and is suddenly pulled under the sand of the deserted beach by an unseen force. The woman's screams for help are heard by Harry Caulder, a harbor patrol officer who is swimming nearby. Harry reports Ruth's disappearance to two LAPD detectives, Royko and Piantadosi, who claim that without a body, there is little they can do. The next day, Ruth's estranged daughter, Catherine, arrives from San Francisco after Harry calls her regarding her mother's disappearance.

Meanwhile, the mysterious and crazed Mrs. Selden, who resides in an abandoned section of the Santa Monica Amusement Pier, witnesses the attack and disappearance (and others throughout the film), but does not come forward.

That night, while staying in Ruth's house, Catherine hears Ruth's dog barking on the beach near the location where Ruth disappeared. Catherine investigates and finds the dog beheaded, near a small sinkhole. Royko and Piantadosi, as well as Harry, are called to the scene, but police pathologist Dr. Dimitrious cannot accurately determine a cause of death for the dog. Royko and Piantadosi believe it to be the work of a serial killer, due to reports of other disappearances over the past few months.

The next morning, a teenage girl is buried in the sand at the beach and begins screaming. Her friends pull her out of the sand, only to see that her legs have been injured from an attack by an unseen creature. The police, led by Captain Pearson, begin an investigation by digging up various sections of the beach at night, but find nothing. The next morning, people visit the beach, which the local media have dubbed "Blood Beach".

The following night, Harry's co-worker Hoagy is closing up the harbor patrol office for the night when his girlfriend ventures under the pier to investigate a noise and is assaulted by a man. After being knocked to the ground by the girl, the would-be-rapist is attacked by the unseen creature, which castrates him.

An evening or two later, Marie, a French airline stewardess who is living with Harry, chases after her hat when it is blown by wind onto the beach. She, too, is grabbed by the unseen creature and pulled under the sand. The next morning, Harry sees Marie's hat on the beach, along with a small sinkhole which he recognizes as similar to the hole at the scene of Ruth's disappearance and the death of the dog. Harry calls the police, who dig up the area around the sinkhole and find Marie's disembodied eyeball.

Searching for the unknown creature's home, Harry ventures to an abandoned section of the pier and finds an access tunnel leading to an underground storage facility. After finding nothing, he leaves the tunnel, not noticing a movement in a collapsed section of the wall. Harry and Catherine go out to a nightclub, where they try to rekindle their romance. Meanwhile, a man with a metal detector is walking under the pier looking for metal objects when he is attacked and pulled under the sand by the still-unseen creature. The man's wife, Mrs. Hench, reports him missing. The next day, Royko and Piantadosi find Mr. Hench emerging from a sewer manhole in a Venice street after escaping from the creature's lair, but he is in a state of shock after being horribly mangled and cannot explain what happened to him.

Hoagy is the next victim, after he visits the pier to try to persuade Mrs. Selden to leave the area. He, too, is pulled under the sand by the underground creature while she watches stoically.

Having been told by Harry about the access tunnel, Catherine visits the storage facility under the pier to look around just as Harry brings Piantadosi with him to investigate. They find all 16 of the creature's partially-eaten victims, including Ruth's severed head, parts of Marie's body and Hoagy's fresh corpse. Captain Pearson arrives with the police, who remove all of the bodies. Pearson orders the officers to use a backhoe and equipment to track the monster down. Increased attention from the local news media lead the police to attempt to kill the creature as quickly as possible and Pearson orders the installation of motion detectors, heat-sensing cameras and explosives.

That evening, the huge creature emerges from the sand and is caught on camera; it resembles a worm-like Venus flytrap. Without hesitation, Royko activates the detonator and the creature is blown to pieces. Dr. Dimitrios points out that they still do not know anything about the monster's origins or abilities. Since it resembled a giant worm, and some worms have the capability to regenerate, Dimitrios wonders what will happen to "each piece".

The next morning, Harry leaves with Catherine to drive her home to San Francisco while the beach reopens to the public, now that the subterranean creature is dead. In the final scene over the end credits, as the beach becomes crowded again, new small sinkholes begin to appear unnoticed all over the sand, implying that Dr. Dimitrios was correct in his theory that the creature has the ability to regenerate from its severed pieces.