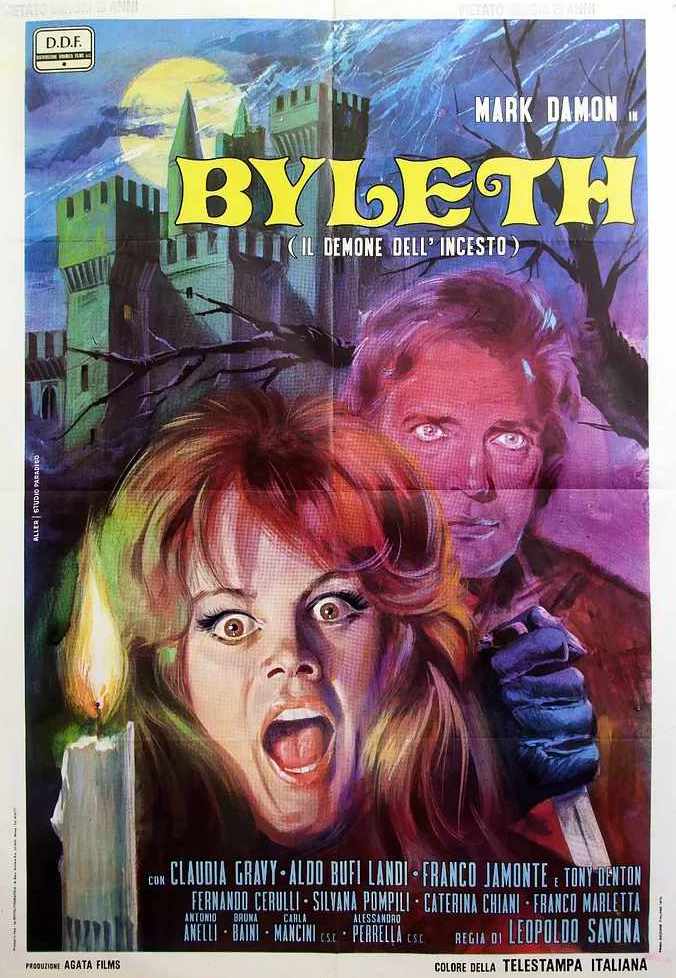 Byleth: The Demon of Incest

A man who is incestually in love with his sister since childhood comes back after a year's absence to find that she has gotten married. Soon, several women in the area start turning up dead with strange wounds on their necks.

The Duke Lionello Shandwell is delighted that his sister Barbara has returned home, after being away for a year in Venice, to his lonely ancestral castle in the Roman countryside. His happiness is disrupted when she reveals that she has since gotten married to Giordano. Although he doesn't fully show it around others, Lionello is deeply disturbed by his sister's new union, and it's not in a protective big brother sort of way. While his sister and brother-in-law stay with him, Lionello sometimes retreats into a tormented, depraved, and jealous state, spying on them making love, harboring repressed aggression towards Giordano. Barbara is a red head, and meanwhile a giallo-esque killer is going around killing red heads. Could it be Lionello venting his aggressions over his unrequited love for Barbara, or is it something more demonic?

In one of the most bizarre EuroSleaze sickies of the ‘70s, Mark Damon (House of Usher, Crypt Of The Living Dead) delivers an atypically unhinged performance as a duke consumed by unnatural lust for his beautiful sister (Claudia Gravy of The Nun & The Devil). Toss in depraved dollops of sex, voyeurism, demonic possession and giallo-style violence, and you get the sumptuous-yet-insane rarity The Wild Eye calls “intriguingly different and endearingly odd for Italian Horror aficionados.” Aldo Bufi Landi (Four Flies on Grey Velvet) and Fernando Cerulli (Death Smiles On A Murder) co-star in this long-lost filth-fest, directed by Spaghetti Western veteran Leopoldo Savona (Pistol Packin’ Preacher, Apocalypse Joe) and now scanned in 2k from negative elements recently discovered in a Madrid lab vault.

This strange cult oddity has been all but forgotten since its release in 1972, and I'm not really surprised at that - as while it certainly is a film with some merit, it's also really bizarre and I have no idea who the target audience might be. The name of the title is a demon, who apparently also happens to be the king of hell and who can curse a man to live in incest. Lionello is a man who has been punished by the demon and thus lusts after his own sister; which is not good news for her husband Giordano. If I had to liken this film to other films I've seen, I'd put it in with the likes of Valerie and Her Weekend of Wonders and The Reincarnation of Isabel as all these films are low on plots but high on weird goings on that don't always make a great deal of sense. This film does not benefit from a constantly intriguing narrative but there is usually just about enough going on to ensure that the film doesn't become boring. Director Leopoldo Savona creates a good style for the film and it does look very nice indeed. The film benefits from a handful of beautiful women who don't seem to mind taking their clothes off, which is also nice and care is taken with the locations also. It soon becomes apparent that the plot is not really all that important; but it is at least worthwhile and the script does bother to tie things up at the end. Overall, this is a decent if strange watch and while I wouldn't recommend anyone goes out of their way to find it; it is at least worth seeing.

A Feast For the Eyes

"Byleth - Il Demone Dell'Incesto" (1972) is an odd Italian flick that isn't very widely known; while this weird little flick is certainly no highlight of Italian 70s Horror, however, it is definitely a beautifully made film that most of my fellow Italo-Horror buffs should enjoy. "Byleth" is an overall very weird little film, with a somewhat confused storyline which doesn't make a lot of sense. The film makes up for what it lacks in continuity, however, with a very beautiful visual style and intense Gothic atmosphere, a great score, a ravishing female cast (and ravishing female nudity) and a pleasantly bizarre mood. As the title implies, the film has to do with incest, and with an eponymous demon; not wishing to spoil anything, I will not continue with a plot description - but even if I did wish to write a synopsis of the storyline, it would probably take me a long time to do so, as it is so very bizarre and, to put it mildly, doesn't always make perfect sense.

Set in 19th century Italy, "Byleth" is a nice blend of atmospheric Gothic Horror and occultism and tasteful eroticism, which also includes some Giallo-elements. Director Leopoldo Savona isn't very renowned, but although this is his only Horror film he definitely succeeded in creating a nice mood here. Regular leading man Mark Damon, who is maybe best known to Horror fans for his roles in Roger Corman's "House of Usher" (1960, starring Vincent Price) and Mario Bava's "I Tre Volti Della Paura" (aka. "Black Sabbath", 1963), fits well in his role here, as a young Duke with a somewhat exaggerated affection to his sister (played by Claudia Gravy). But who could blame him? She's hot! The female cast members are the most ravishing sight of this generally beautifully looking film. "Byleth" is shot in very nice locations, with great set-pieces and accentuated by a truly wonderful score. With such a feast for the eyes, a somewhat lacking plot becomes secondary. Apart from its beauty, the film has some moments that are genuinely creepy, though it never actually becomes scary. Overall, this is certainly a 'style over substance' film, but warmly recommended to my fellow Italian Horror buffs, especially to those who appreciate atmosphere and beauty in a film.

A rather slight but beguiling film that defies categorisation. It doesn't have much truck with a coherent narrative flow either but then it is the malformed or only partly successfully realised films that so often seem to capture the attention of the more jaded cinema viewer. Incest is, I guess, the big ingredient here and the reason why the film has slipped out of availability, but it is linked up with demonic possession too. Oh and rather a lot of naked flesh and erotic goings on. These scenes are well shot and the girls all seem attractive, in fact they also look rather similar to each other, intentionally, I assume, and all but one seems to have red hair. Indeed the outdoor scenes are also attractive and so even when the 'plot' is coming a little unstuck, there is always something beautiful or strange to look at. Decidedly odd at times, this is that little bit different and if there is little blood in the killings we certainly get startling facial close-ups and giallo like wide eyed deaths.

I only have a brother, and I hardly ever get the urge to shag him, so the subject of incest is all new to me. Byleth explores the subject by placing it in a more superstitious era, mixing it up with a possible supernatural angle, throwing in a whole load of nudity, and confusing the crap out of me to boot.

Is Mark possessed by a demon or is that just an excuse for him to frottage his sister's leg? Who is that guy he keeps seeing on the horse who kind of looks like him but might not be? And what happened at the end?

No really - what happened? It didn't make sense to me.

This is surprisingly watchable due to Mark Damon acting mental. He also played a guy who wanted to boff his sister in Crypt of the Living Dead.

A young man possessed by the demon spirit of incest since he was a boy is morbidly in love with his sister.Toss in some female victims,all killed naked with a three-points blade and the fact that this was the first time incest themes were documented in an Italian horror film this way and you have sleazy winner.So I finally watched X-Rated Cult DVD of "Byleth" and I must say that I enjoyed this Gothic mood piece.Strange and atmospheric little horror film that is beautifully shot and has a great score.There is plenty of atmosphere until the climax,which is a big disappointment.Plenty of soft-core sex and full-frontal nudity kept me constantly interested.

Not as sleazy as it sounds.

Countess Barbara (Claudia Gravy) returns home after a year of gallivanting around Europe, much to the delight of lovestruck Duke Lionello Shandwell (Mark Damon, who looks like a cross between Doug McClure and Martin Landau). A couple of problems: 1) she announces that she has got married, and 2) Lionello is her brother (Barbara is a total babe, but that's no excuse). Jealous Lionello proceeds to spy on his sister and her new husband Giordano (Aldo Bufi Landi), including when the couple are making love; meanwhile, a mysterious figure is killing local women with a three bladed weapon. Giordano comes to suspect that Lionello is possessed by the demon Byleth, who causes its victims to kill and live in incest.

Byleth: The Demon of Incest features plenty of nudity and sex, with some very attractive actresses revealing all for their art, but despite the film's salacious title, it really isn't all that depraved. Shame. With a little more deviancy and a lot more gore (the murders are extremely tame, with just a few trickles of blood), this could have been a classic of Italian sleaze, but as it stand. it's actually surprisingly bland, nothing much of interest happening between the soft-core romps and lacklustre deaths.