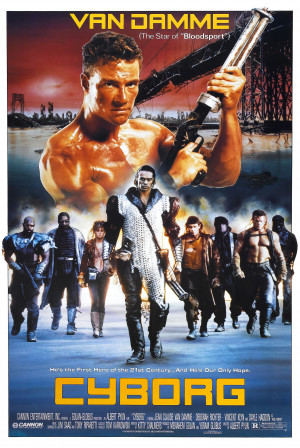 A mercenary while traveling the wasteland of what was the Eastern United States finds himself protecting a woman who could hold the key to restoring humanity.

A plague known as the living death cripples civilization. A small group of surviving scientists and doctors — located in Atlanta, home of the CDC — work on a cure to save what remains of humanity. To complete their work they need information stored on a computer system in New York City. Pearl Prophet volunteers for the dangerous courier mission and is made into a cyborg through surgical augmentation.

Pearl, accompanied by bodyguard Marshall Strat, retrieves the data in New York but is pursued by the vicious Fender Tremolo and his gang of pirates. Fender wants the cure so he can have a monopoly on its production. Strat, badly injured while fighting the pirates, tells Pearl to leave him and find a mercenary, known as a "slinger", who can escort her to safety. She gets cornered but is saved by a slinger named Gibson Rickenbacker. After she explains her situation, they are overrun by Fender's gang, and Gibson is knocked out by falling debris. Fender demands that she accompany him to Atlanta or die.

Fender's gang slaughters a family and steals their boat. They head south for Atlanta via the Intracoastal Waterway with the captive Pearl. Gibson, who had been tracking the pirates, arrives at the scene of slaughter later that night. A shadowy figure attacks him, but he disables her. She turns out to be Nady Simmons, a young woman who mistook him as a pirate. Nady, whose family was wiped out by the plague, joins Gibson. Gibson is less concerned with a cure for the plague than with killing Fender. Gibson and Nady trek southward through the wastelands, where bandits ambush them. Concerned for Nady, Gibson unsuccessfully attempts to convince her to stay away. After declining sex with Nady, Gibson reveals that all he cares about is revenge against Fender, who killed his lover and destroyed his chance to have a normal life and family.

Intercepting Fender and his crew near Charleston, South Carolina, Gibson defeats most of his men, but Fender shoots him with an air rifle. Now nursing a gunshot wound, Gibson realizes Haley (his dead lover's younger sister whom Fender kidnapped) is now a loyal member of Fender's crew. He flees the pirates and ends up alone with Pearl and Nady. Pearl refuses to go with him — she calculates that Gibson is not strong enough to defeat Fender and will be unable to get her to Atlanta safely. She says she will go along with Fender and lure him to his death in Atlanta, where she has resources at her disposal.

Tired, wounded and badly outnumbered, Gibson flees with Nady through the sewer into a salt marsh, where they are pursued by the rest of the pirates and eventually separated from each other. Gibson is thoroughly beaten by Fender and crucified high on the mast of a beached, derelict ship. Haley lingers at the scene but still leaves with Fender. Gibson spends the night on the cross. In the morning, near death, he kicks the mast repeatedly with his dangling foot in a last fit of rage. The mast snaps, sending him crashing to the ground, his arms still tied and nailed to the cross. Finally, Nady appears out of the marsh to free him.

Gibson and Nady intercept Fender once again in Atlanta, this time better prepared. Fender's gang is taken down one by one until he and Gibson face off. During their fight, Nady rushes Fender with a knife, but he stabs and kills her. Gibson in turn stabs Fender in the chest. Thinking him dead, Gibson embraces Haley, who, during the battle turned decisively against Fender. However, Fender gets back up, and they continue to battle in a nearby shed, where Gibson finally kills Fender by impaling him on a meat hook. Gibson and Haley escort Pearl to her final destination, before heading back off.