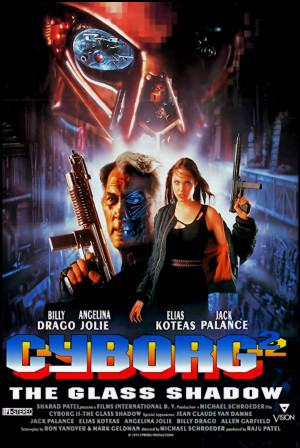 In the year 2074, the cybernetics market is dominated by two rival companies: USA's Pinwheel Robotics and Japan's Kobayashi Electronics. Cyborgs are commonplace, used for anything from soldiers to prostitutes. Casella Reese is a prototype cyborg developed for corporate espionage and assassination. She is filled with a liquid explosive called Glass Shadow. Pinwheel plans to eliminate the entire Kobayashi board of directors by using Casella

In the year 2074, the cybernetics market is dominated by two rival companies: USA's Pinwheel Robotics and Japan's Kobayashi Electronics. ‘Cyborgs’ are commonplace, used for anything from soldiers to prostitutes. Casella "Cash" Reese is a Pinwheel prototype cyborg developed for corporate espionage and assassination. She is filled with a liquid explosive called "Glass Shadow". Pinwheel's CEO, Martin Dunn, plans to eliminate the entire Kobayashi board of directors using Cash as a suicide bomber to precipitate a hostile takeover of the company and obtain a monopoly over the cyborg market.

Cash is programmed to mimic human senses and emotions such as fear, love, pain, and hate. Guided by Mercy, a renegade prototype cyborg who can communicate through any electronic device, Cash and her combat trainer Colton "Colt" Ricks escape the Pinwheel facility so Cash can avoid self-destruction, something that most corporate espionage cyborgs face. They are relentlessly pursued by Pinwheel's hired killer or "wiretapper", Daniel Bench.

Bench must also deal with a rival bounty hunter named Chen, who plans on killing Ricks and reprogramming Cash to have her blow up Pinwheel instead as a means to punish the company's director, Dunn, as reprisal for an earlier act from Dunn that displeased her. However, Chen and Ricks get into a fight, which results in Chen getting electrocuted by a fuse box.

Mercy is later revealed to be a human/android hybrid who was created by Pinwheel as an attempt to create the next stage in human evolution. Mercy escaped before they had a chance to erase his memories. Ricks and Bench fall into a boxing match to find out who lives and who dies, namely going to the African coast[clarification needed], which results in Bench getting mutilated by a rotating fan, resulting in his death. Cash and Ricks escape to a new life in Africa after winning the tournament[clarification needed], while Mercy confronts Dunn, blaming him for ruining his life.

Dunn explains Mercy his motives to be his work only for the mankind's benefit. Unmoved, Mercy then activates his own Glass Shadow bomb, which kills both Mercy and Dunn as well as destroying Pinwheel headquarters. After the skirmish and Pinwheel's downfall, Cash has remained young and beautiful while Ricks continues to age. When Cash realizes that Ricks has finally died of old age, she decides to shut herself down, remaining in a dream state forever.