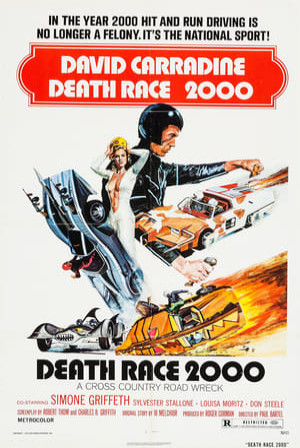 In a boorish future, the government sponsors a popular, but bloody, cross-country race in which points are scored by mowing down pedestrians. Five teams, each comprised of a male and female, compete using cars equipped with deadly weapons. Frankenstein, the mysterious returning champion, has become America's hero, but this time he has a passenger from the underground resistance.

After the "World Crash of '79", massive civil unrest and economic ruin occurs. The United States government is restructured into a totalitarian regime under martial law. To pacify the population, the government has created the Transcontinental Road Race, where a group of drivers race across the country in their high-powered cars and which is infamous for violence, gore, and innocent pedestrians being struck and killed for bonus points. In the year 2000, the five drivers in the 20th annual race, who all adhere to professional wrestling-style personas and drive appropriately themed cars, include Frankenstein, the mysterious black-garbed champion and national hero; Machine Gun Joe Viterbo, a Chicago tough guy gangster; Calamity Jane, a cowgirl; Matilda the Hun, a Neo-Nazi; and Nero the Hero, a Roman gladiator. Machine Gun Joe Viterbo, the second-place champion, is the most determined of all to defeat Frankenstein and win the race.

A resistance group led by Thomasina Paine, a descendant of the 1770s American Revolutionary War hero Thomas Paine, plans to rebel against the regime, currently led by a man known only as Mr. President, by sabotaging the race, killing most of the drivers, and taking Frankenstein hostage as leverage against Mr. President. The group is assisted by Paine's great-granddaughter Annie Smith, Frankenstein's navigator. She plans to lure him into an ambush in order to have him replaced by a double. Despite a pirated national broadcast made by Ms. Paine herself, the Resistance's disruption of the race is covered up by the government and instead blamed on the French, who are also blamed for ruining the country's economy and telephone system. At first, the Resistance's plan seems to bear fruit: Nero the Hero is killed when a "baby" he runs over for points turns out to be a bomb, Matilda the Hun drives off a cliff while following a fake detour route set up by the Resistance, and Calamity Jane, who witnessed Matilda the Hun's death, inadvertently drives over a land mine. This leaves only Frankenstein and Machine Gun Joe Viterbo in the race. As Frankenstein nonchalantly survives every attempt made on his life during the race, Annie comes to discover that Frankenstein's mask and disfigured face are merely a disguise; he is, in fact, one of a number of random wards of the state who are trained exclusively to race in the identity, and each time they die or are brutally mutilated, they are secretly replaced so that Frankenstein appears to be indestructible.

The current Frankenstein reveals to Annie his own plan to kill Mr. President: when he wins the race and shakes hands with Mr. President, he will detonate a grenade which has been implanted in his prosthetic right hand. However, the plan goes awry when Machine Gun Joe Viterbo attacks Frankenstein and Annie is forced to kill him using Frankenstein's "hand grenade". Having successfully outmaneuvered both the rival drivers and the Resistance, Frankenstein is declared the winner of the race, although he is wounded and unable to carry out his original "hand grenade" attack plan. Annie instead dons Frankenstein's costume and plans to stab Mr. President while standing in for him on the podium. Before she is able to do so, Thomasina shoots "Frankenstein", convinced that he killed Annie. The real Frankenstein takes advantage of the confusion and rams Mr. President's stage with his car, finally fulfilling his lifelong desire to kill him. Frankenstein becomes the new president, marries Annie and appoints Thomasina as the Minister of Security to rebuild the state and dissolve the dictatorship. Junior Bruce, the announcer of the Transcontinental Road Race, opposes the race's abolition and impertinently claims that the public needs performances of violence. Annoyed by his complaints, Frankenstein hits Bruce with his car and drives off with Annie to the cheers and applause of the crowd.