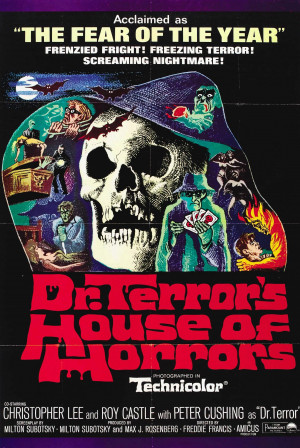 Five strangers board a train and are joined by a mysterious fortune teller who offers to read their Tarot cards. Five separate stories unfold: An architect returns to his ancestoral home to find a werewolf out for revenge; a doctor discovers his new wife is a vampire; a huge plant takes over a house; a musician gets involved with voodoo; an art critic is pursued by a disembodied hand.

Five men enter a train carriage in London bound for (the fictional town of) Bradley, and are joined by a sixth, the mysterious Doctor Schreck (Peter Cushing) whose name, he mentions, is German for "terror". During the journey, the doctor opens his pack of Tarot cards (which he calls his "House of Horrors") and proceeds to reveal the destinies of each of the travellers. This provides the framework to tell five horror stories.

Architect Jim Dawson (Neil McCallum) returns to his old family home on a Scottish isle to make renovations for the new owner, Mrs. Biddulph (Ursula Howells). Biddulph explains she bought the secluded house to help her recover from the death of her husband.

Dawson finds the coffin of Count Cosmo Valdemar behind a fake wall in the cellar. Valdemar, the original owner of the house, was killed in a conflict with the Dawson family centuries ago. Local legend states that Valdemar would reclaim his former home and take revenge on the current owner. Dawson discovers that Valdemar is rising at night as a werewolf, and has already killed a housemaid (Katy Wild).

Believing Mrs. Biddulph to be in danger, he makes silver bullets out of an ancestral cross that protected the house against Valdemar's spirit. When the wolf appears, Dawson is baffled that the bullets don't kill it. Mrs. Biddulph explains that she has replaced the silver bullets with ordinary ones. She reveals to Dawson that the truth of the legend is that Valdemar will take revenge on the last descendant of the Dawson clan, and placing a Dawson corpse in Valdemar's coffin will restore Valdemar to life in human form. It was all a trap: Biddulph is Valdemar's wife, who has returned from the grave after 200 years.

Bill Rogers (Alan Freeman) and his wife and daughter (Ann Bell and Sarah Nicholls) return from their holiday to discover a fast-growing vine in the garden. When the plant seems to respond violently to attempts to cut it down, Rogers goes to the Ministry of Defence, where he gets advice from a couple of scientists (played by Bernard Lee and Jeremy Kemp). The plant becomes intelligent, and harbours homicidal tendencies towards any threats to its existence.

Biff Bailey (Roy Castle) is a jazz musician who accepts a gig in the West Indies, and foolishly steals a tune from a local voodoo ceremony. When he tries to use the tune as a melody in a jazz composition back in London, there are dire consequences. Running from an unknown force, Bailey stumbles against a wall where there is a garish poster for "Dr Terror's House of Horrors". This story is probably[weasel words] based on the short story "Papa Benjamin" by Cornell Woolrich, which was also adapted by the television series Thriller and the radio series Suspense.[citation needed] The quintet of British jazz saxophonist Tubby Hayes appears as Bailey's backing band.

Pompous art critic Franklyn Marsh (Christopher Lee) seems more concerned with his own devastating wit than art itself. Painter Eric Landor (Michael Gough) bears the brunt of one of Marsh's tirades, but gets even by humiliating the critic publicly. When Landor takes it too far, Marsh responds by driving over him with his car, causing Landor to lose one of his hands. Unable to paint any more, Landor commits suicide. Marsh is then tormented by the disembodied hand, which seems immune to fire as well as attempts to contain it, leading to Marsh's eventual blindness in a car accident of his own.

Dr Bob Carroll (Donald Sutherland) returns to his home in the United States with his new French bride, Nicolle (Jennifer Jayne). Soon there is evidence that a vampire is on the loose, and Carroll seeks the aid of his colleague, Dr Blake (Max Adrian). They find that Nicolle is the vampire. Following Blake's advice, Carroll kills Nicolle. When the police come to arrest Carroll for his wife's murder, Blake denies giving any such advice. As the police take Carroll away, Blake says to himself that the town isn't big enough for two doctors or two vampires, and he turns into a bat.

Epilogue
The frame story ends with a twist. Dr. Schreck informs the men that the only way they can avoid these horrible destinies is by dying first. When the train stops, the men find out that they are already dead, having perished in a train crash while their fortunes were being told. Schreck is revealed to be Death himself.