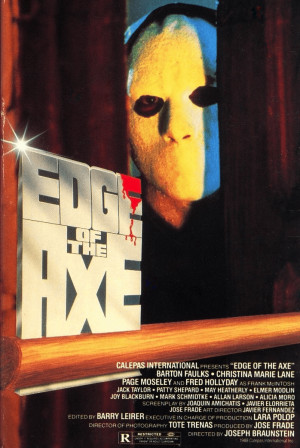 Edge of the Axe

The rural community of Paddock County is being rocked by the crazed exploits of an axe-wielding psychopath, who stalks the night in a black trenchcoat and mask.

As the victims pile up, the authorities attempt to keep a lid on the situation, whilst computer whizz-kid Gerald and girlfriend Lillian seek to unmask the killer before the town population reaches zero.

In the rural Northern California mountain community of Paddock County, nurse Mirna Dobson is viciously murdered by a masked murderer with an axe while driving through a car wash.

Meanwhile, Gerald Martin, an eccentric young man who is obsessed with computers, has recently moved into a cabin on the property of an elderly hermit named Brock. One morning, Gerald accompanies his friend Richard, an exterminator, to investigate a putrid smell in the basement of a local tavern. There, they find the rotting corpse of Mary West, a missing female barmaid, lodged in an attic crawlspace. Her death goes unsolved.

Gerald soon meets Lillian Nebbs, the daughter of another local tavern owner who is home from college. The two bond over their mutual fascination with technology. Late one night, local beautician and prostitute Rita Miller is brutally murdered while walking through town. Her body is found the following morning, crushed by a train on the railroad tracks. Officer Frank McIntosh begins investigating the recent rash of killings. Meanwhile, while entering search commands on a computer Gerald gave her, Lillian finds a list of the three women who have been killed. When she asks him about it, Gerald explains that he regularly makes lists of data for amusement.

During a windstorm one night, another local woman is attacked by the killer, who has infiltrated her home for a second time, having previously broken in and left one of her hogs' severed heads in her bed. The woman flees to her barn, but the killer strikes her in the back with the axe before bludgeoning her to death. While boating on the lake the next day, Richard finds the severed head of a nurse from a local psychiatric hospital. Later that night, Anna Bixby, a leader of Lillian's church choir, finds her dog murdered in her home. When she goes to retrieve her shotgun, the killer, hiding in the pantry, chops her fingers off before hacking her to death.

Lillian confides in Gerald that she has recently discovered her cousin, Charlie, was released from a mental hospital he was admitted to years earlier following a head injury caused when she pushed him from a swing set. She suspects Charlie may be responsible for the killings. Later, Lillian uses Gerald's computer, claiming to be researching a graduate program at the University of Portland. Gerald is puzzled when he finds a list of psychiatrists in the computer's search results log. Lillian admits that she was attempting to research more information about Charlie.

That evening, Laura, Richard's middle-aged artist wife, gets drunk with local Christopher Caplin at the Nebbs' tavern after discovering she is bankrupt. She leaves with Christopher, but crashes her car en route home. She briefly exits the car and rests against a tree. Upon returning to the vehicle, she finds the masked killer in Christopher's seat. The assailant pursues her into the woods and kills her. The next morning, Richard arrives at Gerald's, and tells him Laura never returned home; he claims that she emptied their bank account before disappearing. Laura and Christopher's bodies are found in the woods later that evening. At the crime scene, McIntosh finds a pin from the Nebbs' tavern, leading him and his officers to go question Lillian and her father.

Meanwhile, Lillian, who is home alone, hears strange noises downstairs. Upon investigating them, she is met by Gerald. A frightened Lillian accuses Gerald of in fact being Charlie. He responds by telling her that Charlie is a figment of her imagination; on the computer, he confronts Lillian with supposed medical records of a head injury she sustained years prior, as well as documentation of her psychiatric confinement. Additionally, he produces a list of all the victims, each of whom were either hospital employees who cared for Lillian, or women who were romantically interested in her father. Believing she is being gaslit, Lillian attempts to attack Gerald with an axe. The two fight, and Lillian flees outside with Gerald pursuing her. McIntosh and his deputies arrive just as this occurs, and they swiftly shoot Gerald to death. McIntosh consoles Lillian, who begins to smile maniacally over his shoulder.