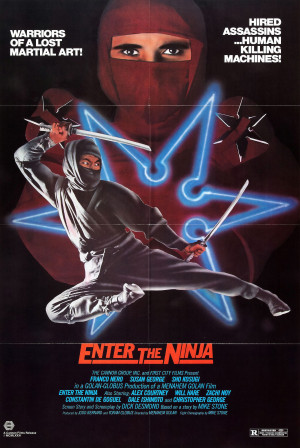 After completing his training of ninjutsu within Japan, an American Vietnam veteran by the name of Cole visits his war buddy Frank Landers and his newly wed wife Mary Ann Landers, who are the owners of a large piece of farming land in the Philippines. Cole soon finds that the Landers are being repeatedly harassed by a CEO named Charles Venarius.

Cole, a veteran of the Angolan Bush War, completes his ninjutsu training in Japan. Cole goes to visit his war buddy Frank Landers and his newlywed wife Mary Ann Landers, who are the owners of a large piece of farming land in the Philippines. Cole soon finds that the Landers are being repeatedly harassed by Charles Venarius, the wealthy CEO of Venarius Industries, in order to get them to sell their property because, unbeknownst to them, a large oil deposit is located beneath their land. Cole thwarts the local henchmen Venarius has hired to bully and coerce the Landers.

Cole and Frank infiltrate Venarius' base, and defeat a number of his henchmen. In the aftermath, Frank gets drunk and confesses to Cole that he is impotent. Mary Ann comes to Cole that night and they have an affair. Venarius, learning that Cole is a ninja, hires a ninja of his own to eliminate Frank and Cole - Hasegawa, who is a rival of Cole from their old training days.

Hasegawa strikes the Landers' estate at night, killing Frank in front of Mary Anne, then abducting her to Venarius' martial arts arena. Cole enters, and picks off the henchmen one by one before ultimately killing Venarius. Hasegawa releases Mary Ann, and the two ninja engage in a final battle. Cole defeats Hasegawa, who begs to be allowed to die with honor, and Cole beheads him.