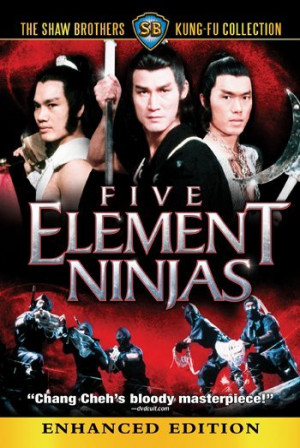 To showcase his incredibly agile new star, Cheng Tien-chi, veteran, venerated martial arts movie director Chang Cheh made this spectacular, internationally popular favorite about evil ninjas and the five Chinese kung-fu masters who beat them at their own game.

In ancient Hong Kong about the Yuan Dynasty, Chief Hong challenges his rival, Yuan Zeng, for the title of martial arts master. Their students face off against each other, and when his students are easily defeated, Hong calls in a samurai to fight on his behalf. Zeng's students are initially dismissive of a Japanese martial artist, but he defeats his opponent, whom he goads into committing suicide. Zeng's student Liang Zhi Sheng defeats the samurai, but before the samurai commits suicide, he warns that an allied ninja clan will seek revenge for his death. He tosses his ring at Zeng, who is poisoned when he catches it.

As Zeng recuperates, he receives a challenge from the Five-Element Ninjas. Suspecting a trap, he keeps two of his best students, Sheng and Tian Hao, at the school to guard it against an invasion and sends ten others to do battle. As Sheng and Hao help to reinforce the school's defenses and set traps, the ninjas use trickery and guerrilla warfare to defeat their opponents. Hong is overjoyed, but the leader of the ninja, Cheng Yun Mudou, advises that they push their advantage to destroy Zeng's school. Hong agrees, and Mudou sends a female spy, Senji, to infiltrate the school. Sheng convinces a reluctant Hao to take her in after they save her from being beaten.

Senji secretly makes a map as she takes various jobs around the school. Distrustful of her, Hao accuses her of hiding his weapon when she cleans his bedroom and demands to taste-test the soup that she has poisoned before letting her serve it to Zeng; to maintain her cover, she intentionally drops it. Once Senji completes her map, she smuggles it to Mudou. That night, Senji offers herself to Sheng, who refuses to take advantage of her, though he agrees that she may play a song for him on her flute. Under the cover of her flute-playing, Mudou's ninja attack the camp, killing many of the students before they are aware of the assault. Senji reveals herself as a spy and mortally wounds Sheng before he can rush to Hao's aid. Mudou kills Sheng and Zeng; Hao, who Senji requests they take prisoner, is the only survivor.

Remembering basic ninja training that he received in the past, Hao escapes from his bonds and takes Senji hostage when she comes to tell him that she has fallen in love with him. Hao escapes the ninja and returns to his old ninja master to complete his training. He joins three other students, who help him in his quest for revenge. Meanwhile, Mudou kills Hong and takes his place as martial arts master. Hao delivers a challenge to Mudou, who sends Senji to spy on Hao and report who his new master is; he also sends four ninjas to spy on Senji herself. Hao easily detects her, but when he also sees the ninjas, he accuses Senji of trying to trap him and kills her. After killing the ninjas, Hao and his fellow martial arts students proceed to fight each of the Five-Element Ninjas.

Now well-trained in ninjutsu and aware of the ninjas' trickery, Hao and his fellow martial arts students easily defeat the Japanese ninjas and destroy their symbols. Mudou, however, proves to be a difficult foe. As the four Chinese ninjas face off against him, he sneaks leg shackles onto Hao. Hao uses a mysterious key his master gave to him to unlock them, and makes many unsuccessful attempts to put them on Mudou. Finally, channeling his rage over the deaths of Senji, Sheng, and Zeng, he shackles Mudou's legs and pulls him down and while his 3 fellow martial arts students spear him, Hao tears Mudou in half. Hao himself is mortally wounded in the process. As his fellow martial arts students enquire as to why he put himself in front of Muduo's spiked feet, he dies. His brothers destroy the final symbol.