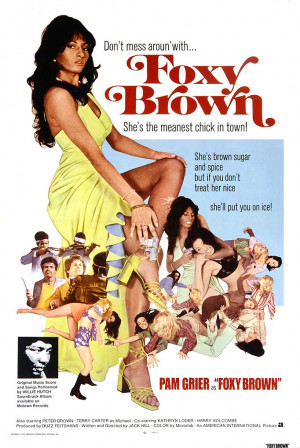 An sexy, voluptuous, black woman named Foxy Brown is on a rampage when her boyfriend is killed by an government agent. Using her body as a tool of attraction and her afro and her gun as a deadly weapon, it's up to Foxy to avenge her boyfriend's murder.

Foxy Brown (Pam Grier) seeks revenge when her government-agent boyfriend is shot down by members of a drug syndicate at her doorstep. She links her boyfriend's murderers to a "modeling agency" run by Stevie Elias (Peter Brown) and Kathryn Wall (Kathryn Loder) that services local judges, congressmen, and police in the area. Foxy decides to pose as a prostitute to infiltrate the company, and helps save a fellow black woman from a life of drugs and sexual exploitation, and reunites her with her husband and child.

Not long after she infiltrates the company, her relationship to her late boyfriend and her brother, Lincoln 'Link' Brown, who ratted her boyfriend out, is exposed. She is caught before she can escape. After an exchange of words and heated death threats, Kathryn decides to keep her alive in hopes of her being worth some money in the sex-slave trade. They give her a shot of heroin and then send her to a farm, which is actually a drug manufacturing plant, with two of Miss Kathryn's henchmen. After she wakes from her sleep, she tries to escape her captors, but is caught by one of the henchmen with a whip and dragged back to the bedroom, where he proceeds to tie her to the bed. Then, Kathryn's second goon comes and gives Foxy another shot of heroin, and the dealer subsequently rapes her.

Using her quick thinking, Foxy uses a razor to get free and escapes her captors by setting the farm on fire. Kathryn orders Stevie to kill Foxy; he vainly attempts to scare information out of Link, and then kills him and his girlfriend. Foxy asks her Black Panther brothers for help; they kill Stevie's partners in crime, capture Stevie and castrate him. Foxy comes to Kathryn's house and shows her the jar containing Stevie's genitals. After killing Kathryn's guards and shooting her in the arm with a hidden pistol, Foxy says that death is too easy for her and wants her to suffer the way that Kathryn made her suffer.