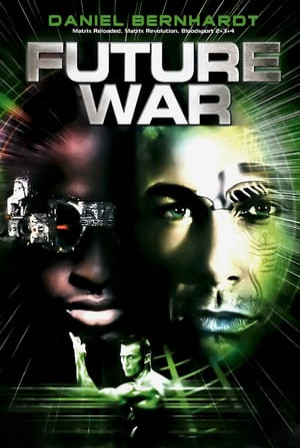 A runaway human slave from Earth's future escapes to the present day. A race of evil cyborgs kidnap humans from Earth's future to use as slaves, and take dinosaurs from the past to use as trackers. One of their slaves, the Runaway, escapes and makes his way to present-day Los Angeles. There he must fend off the cyborgs and their trackers, the police, and the government, befriended by a prostitute-turned-nun who runs a halfway house.

A spaceship is undergoing a revolt. A man enters and activates an escape pod which travels to Earth and crashes into the Pacific Ocean. The pod contains “The Runaway”, a human slave played by Daniel Bernhardt. He is being pursued by cyborg slavers and dinosaurs that they use as “trackers.” Since he was kidnapped some time from Earth's past, The Runaway is familiar with the English language and the King James Bible, and he regards Earth as a literal heaven.

The Runaway finds refuge with novice nun Sister Ann (Travis Brooks Stewart), whose past involved dealing drugs and prostitution. Together, they fight the dinosaurs and their robotic masters, seeking help from a street gang. Future War features star Daniel Bernhardt's kickboxing skills in several fight sequences, including against the Cyborg Master (Robert Z'Dar).

After being arrested as a suspect in a rash of deaths due to strange animal attacks, The Runaway is interrogated by federal agents. They present to him a dinosaur collar found on the beach. The Cyborg Master breaks into the police station during the interrogation and The Runaway manages to escape in the confusion. He returns to Sister Ann and her gang friends with a plan to attack the dinosaurs where they live, as Runaway simply explains, "Near water...".

Using dynamite, The Runaway successfully destroys a water treatment plant, killing the dinosaurs. Later, though, the surviving Cyborg Master attacks The Runaway while he watches Sister Ann make her final vows to become a nun. After The Runaway finally kills the Cyborg Master, he becomes a counselor for runaway teens, working closely with Sister Ann.