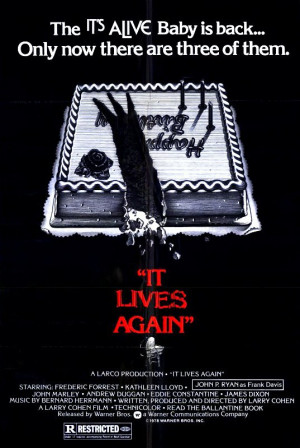 An epidemic of mutant monster babies sweeps America. Parents, Eugene and Jody Scott, take their fanged-monster baby to a secret institute studying more of the same.  There are now three monsters who look like human babies. They appear to be babies, but when these babies are frightened, they kill.

This film continues with Frank Davis (John P. Ryan), still reeling from the death of his child and the part he played in it, seeing his chance to atone by assisting other would-be parents of mutant children. He tries to warn soon-to-be parents Jody (Kathleen Lloyd) and Eugene Scott (Frederic Forrest) of the vast and dangerous conspiracy to murder their baby and the other unborn mutant children who are being born around the country. They are convinced when they are met by Mallory (John Marley) and a strong force of police officers at the hospital as Jody is about to go into labor. She is rescued by Frank from the maternity ward before she goes into labor. The baby is delivered in a truck specially constructed for this specific purpose. They manage to elude the people going after them.

The baby is placed with two others in a secluded confine for observation by the doctors Frank has been working with. Frank informs a skeptic Eugene about the special bond the babies have with their parents. Despite seemingly to adjust slightly to society, they take advantage of an opportunity to escape and begin wreaking havoc. While one of the other babies attacks Eugene in the pool, the Scott baby corners Jody with intentions unclear until Frank arrives to defuse the situation. Frank discovers a homing device placed in Jody's purse by her mother before taking the baby to safety. On his way in the woods, Frank is stopped by a night watchman, whose flashlight spooks the previously calm baby, and it attacks and kills Frank in an attempt to escape.

Mallory is revealed to be the father of the monster baby born in Seattle at the end of the original, and convinces a recovering Eugene and Jody his people manage to track Jody to the place in Los Angeles where her baby is taken. The baby also finds them and Jody calms a frightened Eugene as the baby only came to be a part of the family, just as Frank Davis had previously said. However, Mallory enters with the intent to kill the baby, but it attacks him first, forcing Eugene to shoot it to save Mallory's life.

In the last scene, Eugene is seen going up to expectant couples in the street to warn them and offer his help, just as Frank Davis did to him.