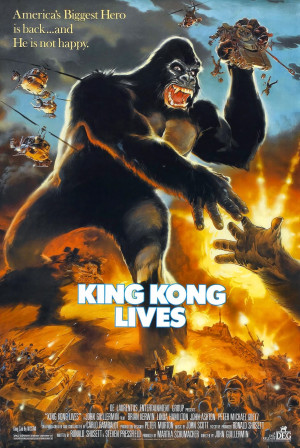 After falling from the Twin Towers, Kong lies in a coma for ten years. When his heart begins to fail, scientists engineer an artificial heart, and a giant female ape is captured to serve as a source for a blood transfusion. When Kong awakens following his heart transplant, he senses the nearby presence of the female ape and the two escape to wreak havoc together.

After being shot down from the World Trade Center, Kong is revealed to be still alive and is kept in a coma for about 10 years at the Atlantic Institute, under the care of surgeon Dr. Amy Franklin. In order to save Kong's life, Dr. Franklin must perform a heart transplant and give Kong a computer-monitored artificial heart. However, he has lost so much blood that a transfusion is badly needed, and to complicate matters, Franklin says there is no species of ape or other animal whose blood type matches Kong's.

Enter Hank "Mitch" Mitchell, adventurer and Franklin's eventual love interest, who travels to Borneo (as he theorizes that Borneo and the island from the first film were once part of the same landmass) and captures a giant female ape who is dubbed "Lady Kong". Mitchell brings her to the institute to use her blood for King Kong's operation. The transfusion and the heart transplant are a success, but Kong escapes along with Lady Kong.

Archie Nevitt, an insane army lieutenant colonel, is called in with his men to hunt down and kill the two apes. Lady Kong is captured alive by Nevitt's troops and imprisoned; Kong falls from a cliff and is presumed dead. However, as Franklin and Mitchell soon discover, Kong's artificial heart is beginning to give out, forcing them to attempt a jailbreak. They discover that Lady Kong is pregnant with Kong's offspring. The jailbreak is successful thanks to Kong, who has survived the fall and breaks his mate out. After being followed, attacked, and shot by the military, Kong kills Lt. Col Nevitt and dies slowly near a military base on a farm where Lady Kong gives birth to an infant son. Kong reaches out to touch his son just before dying. Having returned to Borneo, Lady Kong lives peacefully with her son in the jungle.