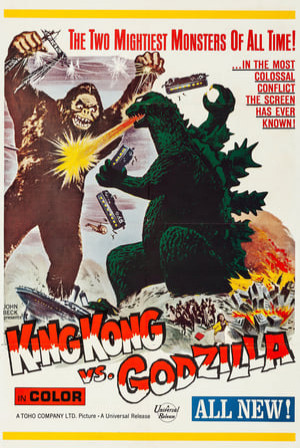 A newspaper and television station funded by a pharmaceutical company want a sensation, which happens to be the discovery of King Kong on an island. He is captured and brought to Japan, where he escapes from captivity and battles Godzilla.

Mr. Tako, head of Pacific Pharmaceuticals, is frustrated with the television shows his company is sponsoring and wants something to boost his ratings. When a doctor tells Tako about a giant monster he discovered on the small Faro Island, Tako believes that it would be a brilliant idea to use the monster to gain publicity. Tako immediately sends two men, Osamu Sakurai and Kinsaburo Furue, to find and bring back the monster. Meanwhile, the American nuclear submarine Seahawk gets caught in an iceberg. The iceberg collapses, unleashing Godzilla (who, in the Japanese version, had been trapped within it since 1955), who then destroys the submarine and a nearby Arctic military base.

On Faro Island, a gigantic octopus crawls ashore and attacks the native village. The mysterious Faro monster, revealed to be King Kong, arrives and defeats the octopus. Kong then drinks some red berry juice that immediately puts him to sleep. Sakurai and Furue place Kong on a large raft and begin to transport him back to Japan. Mr. Tako arrives on the ship transporting Kong, but a JSDF ship stops them and orders them to return Kong to Faro Island. Meanwhile, Godzilla arrives in Japan and begins terrorizing the countryside. Kong wakes up and breaks free from the raft. Reaching the mainland, Kong confronts Godzilla and proceeds to throw giant rocks at Godzilla. Godzilla is not fazed by King Kong's rock attack and uses his atomic heat ray to burn him. Kong retreats after realizing that he is not yet ready to take on Godzilla and his atomic heat ray.

The JSDF digs a large pit laden with explosives and poison gas and lures Godzilla into it, but Godzilla is unharmed. They next string up a barrier of power lines around the city filled with 1,000,000 volts of electricity (50,000 volts were tried in the first film, but failed to turn the monster back), which proves effective against Godzilla. Kong then approaches Tokyo and tears through the power lines, feeding off the electricity, which seems to make him stronger. Kong then enters Tokyo and captures Fumiko, Sakurai's sister. The JSDF launches capsules full of the Faro Island berry juice in gas form, which puts Kong to sleep, and are able to rescue Fumiko. The JSDF then decides to transport Kong via balloons to Godzilla, in hopes that they will kill each other.

The next morning, Kong is dropped next to Godzilla at the summit of Mount Fuji and the two engage in a final battle. Godzilla initially has the advantage due to his atomic heat ray, and nearly kills Kong. After knocking Kong out with a devastating dropkick and tail blows to Kong's head, Godzilla begins burning the foliage around Kong, trying to cremate him. Suddenly, a bolt of lightning from thunder clouds strikes Kong, reviving him and charging him up. The monsters resume their fight, making their way towards the coastline and destroying Atami Castle before falling off a cliff together into the Pacific Ocean. After a brief underwater battle, only Kong resurfaces from the water, and he begins to swim back toward his home island. There is no sign of Godzilla, but the JSDF speculates that it is possible he survived.