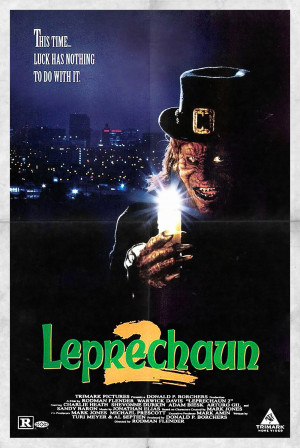 A thousand years ago, the Leprechaun left a bloody trail when he ripped through the countryside in search of his stolen gold. Now he's back in the big city using all of his deadly tricks to snare the girl of his nightmares. His bloody quest becomes more deadly when her boyfriend steals one of the Leprechaun's gold coins.

1,000 years ago in Ireland, an evil Leprechaun celebrates his 1,000th birthday on St. Patrick's Day. He tells his slave, a man named William O'Day, that he has found the perfect bride. Once he marries, the Leprechaun promises to grant O'Day his freedom. O'Day is overjoyed at first, but is horrified to see the Leprechaun has chosen his beautiful daughter. Despite O'Day's pleas, the Leprechaun says that she will be his once she sneezes three consecutive times. Once the Leprechaun manipulates her to do so, O'Day says "God bless you, my child,", freeing her from the Leprechaun. O'Day is then killed by the Leprechaun, who promises to marry an O'Day descendant in a thousand years' time.

On St. Patrick's Day in present-day Los Angeles, a young man named Cody works with his uncle Morty giving "dark side" tours, a scam that drives tourists to alleged resting places of celebrities. When Morty is too drunk to drive, Cody does so, forcing him to cancel a date with his girlfriend Bridget. He drops Bridget off at a go-kart track run by his pretentious rival Ian. Prior to Bridget's departure, the Leprechaun emerges from one of the tour stops: an Irish tree that was present at the home of Harry Houdini. The Leprechaun tears out the gold tooth of a homeless man and goes off to search for his new bride, revealed to be Bridget (a descendant of the O'Day bloodline). A frustrated Cody speeds through a red light and is arrested. Morty picks him up from the police station.

Ian drives Bridget home and attempts to force his way inside her home, but she punches him. As he's leaving, Ian sees Bridget beckoning him to come. The sight is revealed to be a trick by the Leprechaun, who has given a running lawnmower her appearance. Ian is killed as he goes to kiss what he thinks are her bare breasts, actually the spinning mower blades.

Cody visits Bridget and gifts her flowers, and they reconcile. The flowers cause Bridget to sneeze three times, and the Leprechaun suddenly appears to claim her. He escapes with Bridget, but loses one of his gold coins, which lands in Cody's possession. The Leprechaun takes her to his lair and plans to make her his bride, but realizes a coin is missing. He leaves to get the coin back. Since Cody left the flowers behind, he is considered a prime suspect in Ian's death and Bridget's disappearance.

Cody returns home and consults a book with Morty. They learn about the Leprechaun's search for a bride and that cast iron is his one weakness. The Leprechaun suddenly attacks, demanding his coin back. Cody makes a deal to give the coin in exchange for Bridget, unaware the Leprechaun plans to double-cross him. Morty intervenes and they escape to a bar celebrating St. Patrick's Day.

Morty notices the Leprechaun at the bar and challenges to a drinking contest, reasoning with Cody that Bridget can't be harmed as long as the Leprechaun is with him. Morty wins the contest, but the Leprechaun escapes. He sobers up at an espresso bar, killing an obnoxious barista.

Remembering the Leprechaun's weakness, Cody and Morty go to the go-kart track and empty the facility's cast iron safe, intending to capture the Leprechaun inside. They are nearly caught by a security guard, but Morty knocks him out. As Morty as attacked by the arriving Leprechaun, Cody is able to trick and capture him inside the safe. However, Morty locks Cody in a supply closet and demands the Leprechaun give him three wishes, as is tradition. Morty first wishes for the Leprechaun's pot of gold. The wish is unspecifically granted, as the pot manifests inside Morty's stomach. The Leprechaun says he can help remove it, tricking Morty into using his second wish to set him free. For his final wish, Morty asks for the pot to be removed, and the Leprechaun does so by tearing his stomach open, killing Morty.

Cody escapes the closet, but is apprehended by the security guard, who believes Cody responsible for all the killings. The Leprechaun suddenly attacks them with a go-kart, killing the security guard. He attempts to run over Cody, but Cody discovers that he can't be killed as long as he has the gold coin. He makes his way to the Leprechaun's lair.

Cody and Bridget escape the lair. Cody discards the gold coin, remarking that it's "not worth it". They emerge in the sunlight together and kiss.