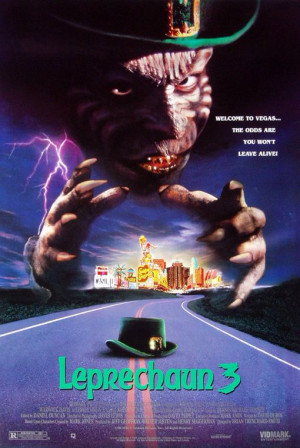 A Las Vegas pawn shop owner purchases a statue of a leprechaun from a mysterious stranger. He ignores the stranger's warning to never remove the statue's golden medallion and takes it for himself. Instantly the statue transforms into the murderous Leprechaun, who vows to kill anyone who takes his gold.

The film begins with the Leprechaun, having been changed into a statue by a magical medallion, being sold to a Las Vegas pawn shop. Assuming his original form when the clerk removes the medallion, the Leprechaun kills him and goes on a rampage through a Las Vegas casino in search of one of his wish granting coins, which is passed from hand to hand. The Leprechaun is ultimately defeated by college student Scott McCoy (John Gatins) and Scott's new girlfriend Tammy Larsen (Lee Armstrong), who blast his gold with a flame-thrower, causing it to vanish and the Leprechaun to burst into flames.