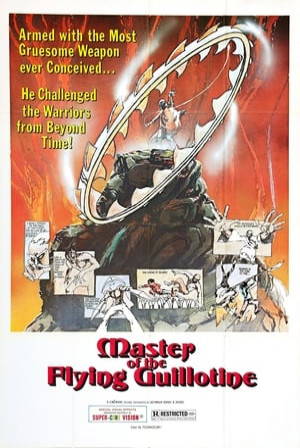 Master of the Flying Guillotine

A one-armed martial arts master is being stalked by an Imperial assassin, the master of two fighters killed in the previous film. When the One-Armed Boxer is invited to attend a martial arts tournament, his efforts to lay low are unsuccessful, and the assassin soon tracks him down with the help of his three subordinates: a Thai boxer, a yoga master, and a kobojutsu user.

The film concerns Wang's one-armed martial arts master being stalked by an imperial assassin, the master of two fighters (the Tibetan lamas) who were killed in the previous film. The title refers to the assassin's weapon, the "flying guillotine", which resembles a hat with a bladed rim attached to a long chain. Upon enveloping one's head, the blades cleanly decapitate the victim with a quick pull of the chain. The Boxer's adversary is the assassin Fung Sheng Wu Chi who is blind, is an expert user of the Flying Guillotine, and relies on others to identify one-armed men, which he then kills. When the One-Armed Boxer is invited to attend a martial arts tournament, his efforts to lie low are unsuccessful, and the assassin soon tracks him down with the help of his three subordinates competing in the tournament: a Thai boxer, a yoga master, and a kobojutsu user.