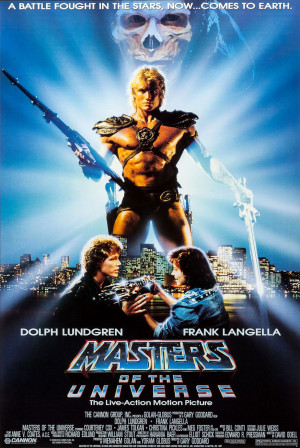 Masters of the Universe

The world of Eternia in the aftermath of Skeletor's war on Castle Grayskull, which he has won after seizing Grayskull and the surrounding city using a cosmic key developed by the locksmith Gwildor. The Sorceress is now Skeletor's prisoner and he begins to drain her life-force as he waits for the moon of Eternia to align with the Great Eye of the Universe that will bestow god-like power upon him.

On the planet Eternia, at the center of the Universe, Skeletor's army seizes Castle Grayskull, scatters the remaining Eternian defenders, and captures the Sorceress of Grayskull, planning to add her power to his own by the next moonrise.

Skeletor's archenemy, the warrior He-Man, veteran soldier Man-At-Arms, and his daughter Teela rescue Gwildor from Skeletor's forces. Gwildor, a Thenorian locksmith, reveals that Skeletor has acquired his invention: a "Cosmic Key" that can open a portal to anywhere by utilizing musical notes. The device was stolen by Skeletor's second-in-command, Evil-Lyn, allowing Skeletor to breach Castle Grayskull.

With Gwildor's remaining prototype of the Key in hand, He-Man and his friends travel to the Castle. They attempt to free the Sorceress but are overwhelmed by Skeletor's army and forced to flee through Gwildor's hastily opened portal, transporting them to Earth. The Key is misplaced on their arrival and discovered by two California teenagers, orphaned high school girl Julie Winston and her boyfriend Kevin Corrigan. While experimenting with the device, they accidentally send a signal that allows Evil-Lyn to track it. She then sends her henchmen—Saurod, Blade, Beast Man, and Karg—to recover it.

Kevin, an aspiring musician, mistakes the Key for a synthesizer and takes it to a music store run by his friend Charlie. Karg's team arrives and chases Julie until He-Man rescues her. Karg's team returns to Grayskull where, incensed by their failure, Skeletor kills Saurod and sends the others back to Earth, with a larger force under Evil-Lyn's command. Unable to find Julie, Kevin is taken to Julie's house by Lubic, a detective investigating the disturbance created by Karg's team. Suspecting the Key is stolen, Lubic confiscates it from Kevin and leaves. Immediately afterward, Evil-Lyn captures and interrogates Kevin for the Key's location with a mind-control collar, before pursuing Lubic.

Julie and the Eternians release Kevin from the collar before they go after Lubic and the Key. They arrive at Charlie's store, but Skeletor's forces catch up with them and a pitched battle ensues. Evil-Lyn recovers the Key and summons Skeletor to Earth. Skeletor's forces capture the Eternians, and Julie is mortally wounded by Skeletor's lightning blast, which simultaneously erases the memory storage of Gwildor's Key. He-Man surrenders to save his comrades and is returned to Eternia as Skeletor's slave. Skeletor demands that He-Man kneel before him for all of Eternia to witness, before he is killed. He-Man refuses and is lashed by Blade's laser whip in an attempt to make him submit. He-Man is still standing when the moon rises, and Skeletor absorbs the powers of the universe. Declaring himself the Master of the Universe, Skeletor asserts his victory and continues to torture He-Man with energy blasts.

Back on Earth, Gwildor repairs the Cosmic Key and Kevin re-creates the tones necessary to create a gateway to Eternia. The group, including Lubic who attempts to arrest them, are transported to Castle Grayskull, where they begin battling Skeletor's forces. Resenting that Skeletor absorbed the power of the Universe without sharing it with her, Evil-Lyn deserts him along with the other henchmen. Skeletor accidentally frees He-Man, who reclaims the Sword of Grayskull, and they battle until He-Man shatters Skeletor's staff, removing his new powers and restoring him to his normal state. He-Man offers mercy, but Skeletor draws a concealed sword and attempts to kill He-Man; He-Man knocks Skeletor into a vast pit below. The freed Sorceress heals Julie and a portal is opened to send the Earthlings home. Hailed as a hero for his bravery, Lubic decides to remain on Eternia.

Julie awakens on the morning of her parents' deaths by plane crash. She prevents them from taking the ill-fated flight by taking their keys, and runs outside to find Kevin. Kevin confirms that their experiences were real, producing a souvenir from Eternia: a small blue sphere containing a scene of He-Man in front of Castle Grayskull with his sword raised above his head.

In a post-credits scene, Skeletor's head emerges from the water at the bottom of the pit, saying "I'll be back!"