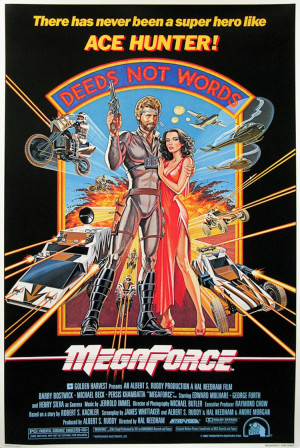 Megaforce is an elite multi-national military unit that does the jobs that individual governments wont. When the peaceful Republic of Sardun in under threat from their more aggressive neighbour the beautiful Major Zara and General Byrne-White see the help of Ace Hunter and Megaforce.

The story involves two fictional countries, the peaceful Republic of Sardun and their aggressive neighbor Gamibia. Unable to defend themselves from a Gamibian incursion, Sardun sends Major Zara and General Byrne-White to ask the help of MegaForce – a secret army composed of international soldiers from throughout the western world, equipped with advanced weapons and vehicles. The MegaForce leader, Commander Ace Hunter, will lead a mission to destroy the Gamibian forces, which are led by his rival, and former military academy friend, Duke Gurerra.

While Hunter composes an elaborate battle plan to destroy Gurerra's forces, Zara tries out to become a member of MegaForce. As she executes the various tests, Hunter's feelings of affection toward her grow. And while she passes the tests, he is unable to allow her to participate in their raid, because her presence, as an outsider, would disrupt the trust and familiarity of his force.

Eventually, MegaForce successfully para-drops its attack vehicles into Gamibia and Hunter mounts his sneak attack against Gurerra's forces. Although they manage to destroy his base, they are told by General Byrne-White that Sardun has decided they will not be allowed to cross the border into their country because they consider MegaForce too dangerous a global organization.

At the same time, Gurerra has set a trap for them at the team's only means of escape – a dry lake bed where the cargo planes will pick them up. Gurerra sends his tanks to secure the lake bed while Hunter comes up with a plan to attack Gurerra from behind by crossing over a mountain range the enemy tanks had turned their backs toward.

The plan succeeds, and MegaForce manages to break through Gurerra's tanks, but one of MegaForce's cargo planes is damaged in the process. Having to abandon their high-tech vehicles (which they program to self-destruct), the team successfully makes it on foot to the last plane, except for Hunter. The commander, instead, makes his own dramatic escape on his motorcycle after it deploys airfoils and a rocket motor and catches up with the cargo plane in midair. Although he has lost the battle, Gurerra shows admiration for Hunter's cunning, and he gives his old friend a thumbs up.