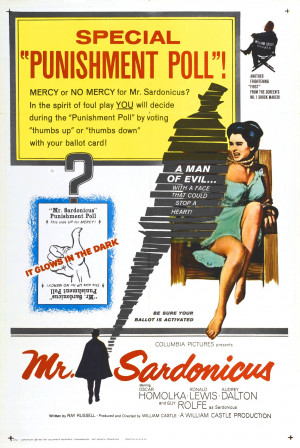 A search for a winning lottery ticket in his dead father's grave causes Sardonicus' face to freeze in a horrible grimace, until he forces a doctor to treat his affliction--with even more grotesque results! The audience gets an opportunity to vote--via the "Punishment Poll"--for the penalty Sardonicus must pay for his deeds...

Maude is afraid of what may happen if Sir Robert refuses Sardonicus' requests. Even Krull is not immune to the baron's cruelty; he is missing an eye, lost to Sardonicus' anger.

Sardonicus tells his story to Sir Robert. He was born Marek Toleslawski, a farmer like his father Henryk (Vladimir Sokoloff). Marek and his wife Elenka (Erika Peters) lived a humble life with his father, but Elenka and Henryk wanted more. Henryk bought a ticket for the national lottery but died before the drawing; after his burial, Marek and Elenka discovered that the ticket won but had been buried with Henryk. Elenka insisted that Marek retrieve the ticket from the grave to prove his love to her. Upon opening the grave, Marek was traumatized by the sight of Henryk's "grinning" skull. His face was frozen in a horrifying grin, leaving him unable to speak intelligibly. Elenka, terrified by the transformation, committed suicide. The lottery prize allowed Marek to buy a title and a castle, but he had no one to share them with. Marek renamed himself "Sardonicus" and hired speech experts to retrain him to speak. He conducted experiments on young women to find a cure for his condition, but had no success. He learned from his new wife, Maude, that Sir Robert was a great doctor specializing in paralysis, and he had hoped Sir Robert could restore his face.

As they prepare to leave by train, Krull implores them to return. Sardonicus has lost the power of speech again, and he cannot open his jaw or lips. Sir Robert tells Krull that the injection was only water, and that the plant extract would have been lethal even in a small dose. It was a placebo, and Sardonicus' affliction was only psychosomatic. Once Sardonicus realizes that, he will be completely restored.

Krull returns to the castle and tells the baron that he just missed Sir Robert's train. Krull sits down to eat his lavish dinner in front of Baron Sardonicus who is doomed to starve.

The son of an 1840s New England patriarch lusts after his father's bride leading to tragedy.