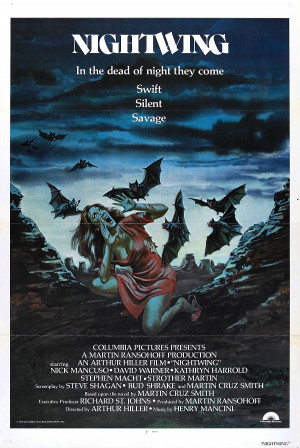 A colony of vampire bats terrorize a small Indian community in New Mexico. Standard “Nature goes berserk” plot turns extra hokey toward the end when supernatural forces are discovered working through the bats.

The film is set in a native American reservation in New Mexico that finds itself under the brutal assault of a bunch of vampire bats dripping with the plague.

Deputy Youngman Duran is a do-gooder  who believes he represents and must protect the culture and rich traditions of his tribe. At the other end is Walker Chee who is hell bent on capitalizing on the potentials and wealth from the oil that has recently been discovered in the tribe’s holy grounds. Duran however believes exploiting the oil’s potential wealth means compromising on the tribe’s traditions and culture.

A colony of ferocious bats spreading the plague further complicate the tense situation as Deputy Duran is forced to quarantine the town which threatens to jeopardize Walker’s plans to exploit the oil.

“An eco-thriller/horror adapted from the novel by Martin Cruz Smith (Gorky Park).  Nightwing is the story of a colony of plague-spreading bats that brings terror to a small Native American community.  The local sheriff, Duran (Nick Mancuso), believes ancient spirits are at work, taking shape in the animals, a belief buoyed by the death of troublesome shaman Abner. The local authorities, however, do not share his superstitious beliefs. Bat expert Payne (David Warner) does, however.”

Rabid vampire bats which are indiscriminately slaughtering cattle and humans alike on a New Mexico Indian reservation are tracked to their deadly lair by an English Biologist in an effort to avenge the death of his father, who was eaten by them. Duran is a reservation cop who doesn''t believe the tribal lore that explains the bats'' strange behavior as part of some sort of spiritual revenge.