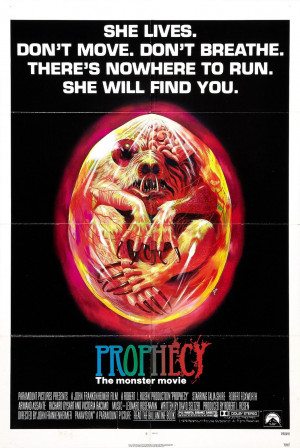 A Savage beast, grown to monstrous size and driven mad by toxic wastes that are poisoning the waters, spreads terror and death on a Maine countryside.

While searching for lost lumberjacks, three members of a search-and-rescue team are killed by an unseen force.

Dr. Robert Verne accepts a job from the Environmental Protection Agency to write a report about a dispute between a logging operation and a Native American tribe near the Androscoggin River or Ossipee river in Maine. Dr. Verne's wife Maggie accompanies him on the trip. She is pregnant, but is apprehensive to tell her husband as he is against having children.

In the town, the local paper mill director, Bethel Isely blames the Native Americans, dubbed Opies (short for "original people") for the missing lumberjacks and rescue team. The Opies instead blame Katahdin, a vengeful spirit of the forest that has been awakened by the activities of the loggers, which Isely describes as "larger than a dragon with the eyes of a cat". The Vernes are disturbed when they witness a confrontation between the Opies and Isley's bodyguard, Kelso, which nearly results in the death of an Opie, John Hawks.

The Vernes see several signs of environmental damage: a salmon large enough to devour a duck; a deranged, vicious raccoon; plant roots growing on the surface; and a bullfrog-sized tadpole. Hawks and his friend Ramona ask Verne to include Opie perspectives in his report. They believe the paper mill operations are somehow causing grave danger to the environment and people alike. Hector M'Rai, Ramona's grandfather, claims to have seen Katahdin and describes him as "part of everything in God's creation". Verne and Maggie tour the paper mill to look for incriminating evidence. Although Isely insists the mill has excellent safety protocols, Verne notices that Maggie's boots have mercury deposits—a mutagen that causes birth defects, it is used in logging as a fungicide and does not show up in water purity tests because it sinks to the bottom. Verne needs more evidence and determines to take blood tests from the Opies.

That night, the Nelson family, who have set up a camp in the woods, are killed by Katahdin, a large bear with one of its sides containing horribly mutated skin. Isely and Sheriff Bartholomew Pilgrim believe Hawks and the Opies are responsible and try to arrest them. However, Hawks escapes. Verne, Maggie, and Ramona take a helicopter to the campsite to investigate the killings. Verne and Ramona find huge scratch marks on the trees, while Maggie finds two mutated bear cubs, one dead and one alive, trapped in a salmon poacher's net. Forced to spend the night in the woods due to inclement weather, they nurse the cub back to health inside one of Hector's tepees. A distressed Maggie explains to Verne about her pregnancy and that she has eaten contaminated fish. Isely and Sheriff Pilgrim arrive and, upon seeing the mutant cub, accept that Hawks and his men are innocent of any crime. Katahdin arrives and attacks the camp in search of her cub. Pilgrim is killed, but the others escape through tunnels beneath Hector's home.

The next day, Isely tries to reach a nearby radio tower to call for help, but is killed by Katahdin. Later that night, she attacks the truck in which the others are driving away. They swim across a river to a log cabin. Verne drowns the cub when it attacks Maggie. Katahdin kills Hector and Hawks, and knocks Ramona and Maggie unconscious. Verne stabs Katahdin repeatedly, forcing her into the lake where she drowns. The next day, Verne and Maggie escape, unaware that another mutant creature (the cubs' father) is still active within the forest.