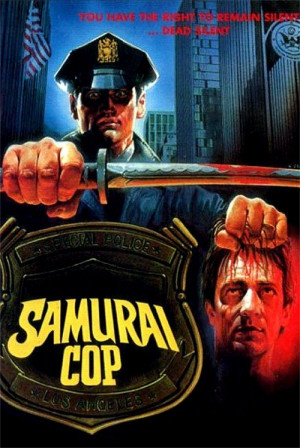 When Japanese organized crime imbeds itself within LA, the police turn to one man to take down the deadly Yakuza — Joe Marshall, aka "The Samurai." With his fearless swagger and rock hard jaw, The Samurai tears a two-fisted hole through the mob and doesn't stop until the job is done.

When a renegade Japanese gang known as the Katana take control of the cocaine trade in Los Angeles, the LAPD transfer in a "samurai" policeman from the SDPD to help tackle the problem. Joe Marshall has been trained by the masters in Japan and speaks fluent Japanese, but dresses like a commoner.

An attempted bust meets with failure after a bizarre car chase leads to multiple deaths and the only witness burned and unable to testify. Katana boss Fuj Fujiyama orders the injured Katana member to be executed and his head displayed on a piano to remind all remaining Katana members of their code of silence. Joe and his partner Frank confront the Katana at the Carlos'n Charlie's restaurant on Sunset Boulevard and attempt to reprimand them into obeying the law. When that fails, Fujiyama's right-hand man Yamashita wages war in the parking lot, executing his own men who fail to subdue Joe and Frank, thus maintaining the code of silence.

Joe then stalks Fujiyama's girlfriend Jennifer and seduces her. They become intimate while several of his police comrades are tortured and killed by the Katana gang who are looking for him. Unable to contain his anger any longer, commanding officer Captain Roma sanctions an assassination of every single Katana gang member. Joe and Frank head to Fujiyama's compound and gun down every living person and a final sword battle between Joe and Yamashita ends the Katanas' reign of terror. At the end, Joe and Jennifer embrace again on the beach.