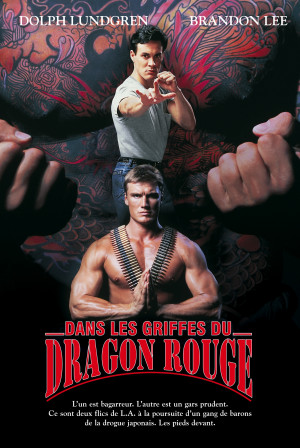 Two L.A. cops, Chris Kenner and Johnny Murata, with opposing views, they both excel at martial arts, on what is the best way to uphold the law have to work together to bring down the Yakuza, a vicious yakuza drug dealer with ties to Kenner's past, while trying to protect a beautiful woman.

Los Angeles cop Chris Kenner (Dolph Lundgren) is an American who was raised in Japan. He is given a new partner, Johnny Murata (Brandon Lee), an American of partial Japanese descent. Kenner does not appreciate American culture, while Johnny does not like Japanese culture much. One thing they both enjoy are the martial arts, in which they are both experts. The two are assigned to L.A.'s Little Tokyo, where they break up some criminal activity in a Japanese restaurant, and an arrest is made.

While Kenner and Johnny are questioning the suspect, Kenner loses his temper and rips the suspect's shirt, and the tattoos that Kenner sees on the suspect remind Kenner of when he was 9 years old, a time when he witnessed his parents being killed by a member of the Yakuza. The tattoos are the trademark of the Iron Claw Yakuza clan. Before Kenner or Murata can interrogate the suspect further, he kills himself in the interrogation room by breaking his own neck.

The leader of the Iron Claw clan, Yoshida (Cary-Hiroyuki Tagawa), kills the owner of a popular downtown nightclub called the Bonsai Club by crushing the owner, Tanaka (Philip Tan), in a car compactor. To celebrate gaining ownership of the Bonsai Club, Yoshida throws a party at his house with all of the club staff. One of the girls at the party, named Angel (Renee Griffin), is revealed to have warned Tanaka about Yoshida behind his back, and this infuriates Yoshida who then questions Angel about her loyalty. She attempts to appease Yoshida by offering her body to him but Yoshida instead drugs Angel and strips off her clothes, and then fondles her from behind before beheading her.

When the coroner runs an analysis on Angel's body, it is revealed that the methamphetamines in her system would have led to her death anyway. This discovery of drugs, together with the suspect having Yakuza tattoos, prompts Kenner and Johnny to go to the Bonsai Club in search of information. There they meet lounge singer Minako Okeya (Tia Carrere), who was a good friend of Angel's. Before they can get any useful information out of her, they are ambushed and taken to see the nightclub's owner and Kenner recognizes Yoshida as the man who killed his parents. Yoshida is now a drug manufacturer using a local brewery as his distribution center. He uses smaller gangs such as the Hells Angels, Crips and Sureños to peddle the drugs for him, in return for a percentage of the profit. Kenner pulls his gun on Yoshida and almost kills him to avenge the death of his parents, but Johnny manages to diffuse the situation and they both leave the nightclub.

That night, Yoshida rapes and kidnaps Minako and holds her hostage in his home and vows to kill Kenner. Kenner and Johnny set out for Yoshida's heavily guarded home, where they rescue Minako. His pride wounded, Yoshida sends his men out to get Minako back. He has Kenner and Johnny stripped, captured and tortured, but Kenner and Johnny manage to escape.

They then prepare an assault on Yoshida's brewery, where they rescue Minako once again and Kenner fights Yoshida in a duel, in which Kenner uses a sword to impale Yoshida on a giant, spinning firework called a Catherine wheel, which burns Yoshida while spinning at high speed, and then the wheel explodes and kills Yoshida.