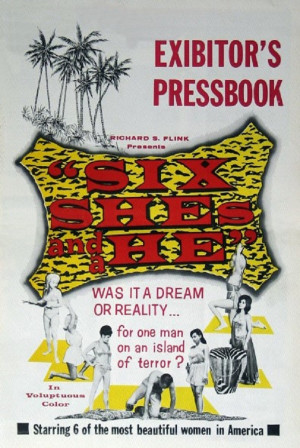 Six She's and a He

A soldier stranded on a desert island is captured by a tribe of sadistic women who torture and mutilate the men who oppose them. The 46min version is the only one available at the moment

Bill Rogers (A Taste of Blood) plays Fred Rogers (!), a B-26 bomber pilot whose plane goes down around Okinawa. Passed out in a raft in the middle of the ocean, he’s pulled to shore by some lovely loinclothed ladies led by Aphrodite (Launa Hodges), who says, “You will get to know this stick intimately.” (Trust me: It’s a warning, not a come-on, because this half-dozen of honeys are not in that kind of movie.)

Surrounded by live exotica tunes, tiki torches aplenty and a pig roasting on a mouth-to-anus spit, the all-female tribe of six sexpots live and love on a set that looks borrowed either from a school play adaptation of Fantasy Island or from a scrapped Price Is Right Showcase Showdown. While the women do have offscreen sex with Fred, they also deprive him of sleep, subject him to hard labor and harder bamboo swats, and flaunt their all-around superiority to the Aqua Velva man.

Just ask the Nazi (Joe Capriano) who gets his guts torn out by the gals during a torture ritual. On the movie’s meager resources, the German soldier’s intestines resemble wet balloon animals. In other words, Six She’s and a He — directed by Richard S. Flink (producer of William Grefé’s Sting of Death) and written by actor William Kerwin (God’s Bloody Acre) — is something of a wet dream as scripted by Herschell Gordon Lewis and/or a nightmare of the incel set. Neither is a bad thing.