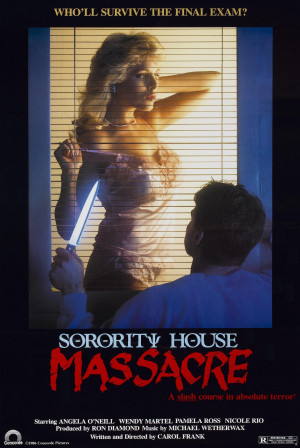 A little girl's brother kills the whole family but her (she escapes by hiding in the basement). He is committed, and she grows up with a new family, eventually going to college, where she joins a sorority. Due to a memory block, she doesn't remember that the sorority house was her childhood house. Her brother senses her presence in the house and escapes so he can finish the job he was unable to complete.

When Beth (Angela O'Neill) is a little girl, her brother Bobby (John C. Russell) kills her whole family and attempts to kill her. When he is caught, he is committed, and she grows up with a new family. Years later, Beth goes to college, where she joins a sorority. Due to a memory block, she doesn't remember that the sorority house was her childhood home, however her memory soon starts to return. Meanwhile, Bobby senses her presence in the house and escapes the mental asylum so he can finish the job he was unable to complete. He steals a hunting knife in a hardware shop killing the elderly owner.

As Beth settles into the sorority, many of the girls leave for the weekend, leaving only her, Linda (Wendy Martel), Sara (Pamela Ross) and Tracy (Nicole Rio) in the house. As the girls enjoy having the house to themselves, Craig (Joe Nassi), Andy (Marcus Vaughter) and John (Vinnie Bilancio) come over. John tells the story of Beth's family murders, scaring her. She goes to bed and has a nightmare about her brother, becoming more scared. She remembers her brother hiding a knife in the fireplace, and when the group investigate, they find the knife. Realizing the time, Andy leaves in a rush, only to be confronted by Bobby and stabbed to death. Linda hypnotizes Beth, who recalls Bobby attacking her. Afterwards, Tracy and Craig go outside to the tipi they set up earlier, while Linda and Sara go to bed. Bobby attacks Tracy and Craig, shredding the tipi with his knife. As they try to escape, Tracy is stabbed to death. Craig runs into the house and alerts Linda and Sara who try to phone the police but find the lines have been cut. They attempt to warn Beth and John, but both have fallen asleep. As Bobby approaches them, Beth wakes and runs upstairs to the others, but John is murdered.

The survivors barricade themselves inside a room, before Craig escapes out the window down a safety ladder. While he holds it steady for Linda to climb down, Bobby stabs Craig to death before climbing up the ladder for Linda. Linda manages to make it back through the window and the others remove the ladder, making Bobby fall. Thinking he is dead, the girls try to escape the house but upon discovering he is still alive barricade themselves back into the room. However, Bobby comes in through the window and they flee outside. They once more encounter Bobby, who manages to repeatedly stab Sara. Meanwhile, Bobby's search party realize he will have gone to his old house and send the police there.

Beth and Linda run down into the basement where Beth finally realizes what happened to her when she was younger. When Bobby once more attacks them, the girls run upstairs. Bobby corners Beth but Linda manages to hit him with a shovel. Thinking he is dead, they begin to leave the house, but Bobby stabs Linda before attacking Beth who over powers him and stabs him in the neck, killing him. The police arrive. Beth is taken to the hospital where she continues to have nightmares about her brother.