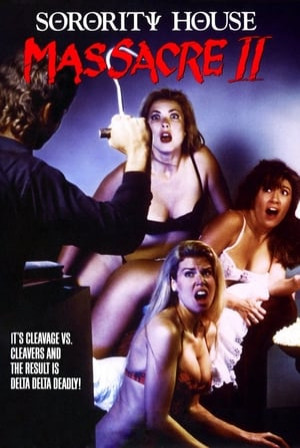 Five college women buy the old Hokstedter place for their new sorority house. They got it cheap because of the bloody incidents from five years before. They decide to stay in it for the night so they can meet the movers in the morning, but begin to get the creeps when the weird neighbor Orville Ketchum starts poking around. Shortly after the women take showers and consult a Ouija board they begin experiencing an attrition problem.

Five women, Linda, Jessica, Kimberly, Suzanne and Janey buy a new sorority house. They get it cheap because of the bloody incidents that took place five years earlier, committed by a murderer known as Hockstatter. They decide to stay in it for the night so they can meet the movers in the morning. Janey tells the group of the murders, putting them on edge. As it turns to night, a storm rolls in and the girls meet their creepy new neighbor Orville Ketchum, who recalls the night of the murders and how Hockstatter was defeated. He gives them the key to the basement before returning home. The girls decide to explore the basement, and find Hockstatter's tools and a ouija board. Meanwhile, Lt. Mike Block and Sgt. Phyliss Shawlee set out to get to the Hockstatter house after they receive a disturbance call.

After taking showers, the group decide to use the ouija board to contact Hockstatter. However, after the planchette mysteriously flies into the fireplace, they become too scared and go to bed. After Suzanne and Janey have an argument, Janey returns downstairs to drink the rest of the alcohol. However, she is attacked and killed with a hook by an unknown assailant.

Soon after, Suzanne goes downstairs to find Janey. She alerts the others of Janey's disappearance, and the group split up to search. Suzanne goes up to the attic and accidentally stands on a bear trap before the killer slashes her to death. Meanwhile, Mike and Phyliss travel to a strip club to talk to Candy, a survivor of the Hockstatter massacre. Mike suspects Orville was part of the crimes but Candy can not recall.

Linda, Jessica and Kimberly go down to the basement to find the two missing girls. Just as they are about to give up, they find their bodies strung up on the ceiling. The girls run upstairs and arm themselves with knives before attempting to leave. They run into Orville and retreat back into the house. As they become more panicked, they realize they left the attic window open. They run upstairs to lock the window. As Kimberly sees wet footprints, she realizes that he has already gotten into the house and flees. Jessica goes after Kimberly but Linda stays. Kimberly bumps into Orville and hides in a bathroom, but the killer gets in and murders her.

While Linda hides in the attic, Orville enters. She manages to stab him numerous times before choking him. She starts her way downstairs but is attacked again by a still alive Orville. She overpowers and drowns him in the toilet. She goes downstairs and the phone rings. A woman asks for her husband, Hockstatter, before warning her he is in the house and hangs up. Linda is lured into the basement by Jessica, who reveals herself to be the killer and has been possessed by Hockstatter. Jessica chases Linda upstairs where the two fight before Orville reveals himself to still be alive. Orville stabs Jessica but she knocks him out before Linda manages to defeat Jessica, stabbing her in the neck.

The next morning, Mike arrives with police officers after the movers found the bodies. They find Linda still alive, but now possessed by Hockstatter. Orville wakes up and shoots Linda dead before the police officers shoot Orville. He, however, survives and is rushed to hospital and later released after police could not pin the murders on him.