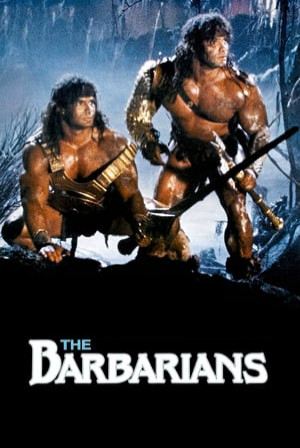 Orphaned brothers Kutchek and Gore are adopted by a tribe led by Canary the owner of a powerful jewel. The evil Kadar wants both Canary and the jewel. Attacking the tribe he kidnaps Canary but the stone eludes him. The brothers are taken to be trained as gladiators and years later have grown to be VERY big. They escape and set off on a quest to find the jewel and rescue Canary.

The film is set in a heroic fantasy world. The Ragnicks, a tribe of peaceful travelling entertainers, are attacked by the evil tyrant Kadar, who takes their queen Canary hostage. Canary, however, manages to hide her magic ruby, the lucky jewel of the Ragnicks which Kadar seeks to bolster his power. Two young twins from the tribe, Kutchek and Gore, bite off two of Kadar's fingers. In retaliation, Kadar has them taken prisoner as well, but agrees to spare their lives if Canary becomes his bride.

Kutchek and Gore are separated and work as slaves for several years, and grow up as amazingly strong adults. Once they have come of age, Kadar sets them up to fight each other to the death in the arena, their faces masked by metal helmets. But as they struggle, Gore knocks open Kutchek's helmet, revealing his face; after recognizing each other, and after seeing Canary as a prisoner by Kadar's side, the twins escape from Kadar's fortress. In the woods, they find their old tribemates, who have led a life of misery ever since Canary's kidnapping, and a girl named Ismena, a thief imprisoned by the Ragnicks. At first mistaken for enemies and nearly hanged, Kutchek and Gore manage to reveal their past association with the tribe.

Incensed by the cruelties Kadar has imposed upon their lives, the two brothers plan to go back and seek revenge on the tyrant. Ismena leads them to a local trading post to get them some weapons, but have to leave empty-handed when the weapons dealer challenges them to a bout of arm wrestling and proves to be a bad loser. The three of them thereupon sneak their way into the palace harem, where Kutchek and Gore find Canary imprisoned. Instead of being freed, however, Canary insists that the two brothers recover the ruby, which has been secreted in an area called the Forbidden Land, where the Ragnicks first received the ruby and which is guarded by a fearsome dragon. But their presence in the palace is eventually discovered by China, Kadar's court sorceress. Intent on seizing the ruby for herself, China tortures Canary for information and departs to the Forbidden Land, but just as she find the gem, China and her entourage are met by the dragon, who devours them.

Following Canary's advice, the twins and Ismena first travel to a secret tomb to recover several magical weapons to fight the dragon, and then proceed to the Forbidden Land. The dragon rises to kill them, but the brothers slay it and recover the ruby from its guts. They entrust the gem to Ismena to return it to the Ragnicks, while they prepare to carry the final fight to Kadar. But then Kadar, who has discovered China's treachery, arrives along with Canary, and knowing that her time is at an end, Canary calls upon the ruby's magic to make Kadar kill her and call Kutchek and Gore back to the Forbidden Land. The brothers encounter the tyrant and slay him once Kadar finds his box of tricks exhausted.

With Canary dead, the ruby turns to stone, but Ismena refuses to give up. Suddenly, the ruby is restored, a sign for the Ragnicks to choose a new queen for their tribe by inserting the ruby into the candidates' belly button, where it shall stick to mark her as their new ruler. But none of the Ragnicks' maidens appears to be suitable, whereupon the tribe chooses Ismena to try. The ruby remains in place, and Ismena finally reveals herself as Kara, Kutchek and Gore's old tribemate who had since left the Ragnicks for a life of her own. With their spirit restored, and with the brothers' return, the Ragnicks are free to resume their life of travelling and entertainment.

In a remote military outpost in the 19th century, Captain John Boyd and his regiment embark on a rescue mission which takes a dark turn when they are ambushed by a sadistic cannibal.