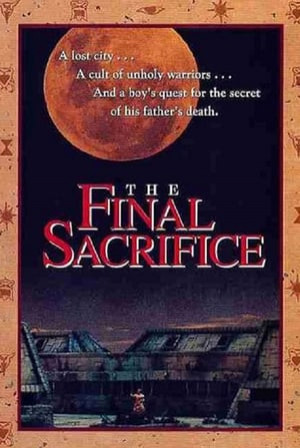 Ruled by the evil Satoris, an ancient cult of Canadian wrestlers, the Ziox, are bent on world domination. Instrumental to their plan is a map to the ancient Ziox cult idol, recently discovered by a young boy, Troy. When the Ziox invade his home to recover the map, he flees and ends up in the bed of a passing pickup truck, driven by Rowsdower. Rowsdower and Troy become friends, and together search for the lost idol before the Ziox can claim it and take over the world.

Quest for the Lost City

A teenage boy named Troy McGreggor finds a map belonging to his late father, who was murdered seven years earlier. Troy’s father, Thomas, was an archaeologist who met his untimely death after becoming involved with a mysterious cult led by a sinister man with supernatural powers known only as Satoris (Shane Marceau). The orphaned Troy decides to study the map to learn about the circumstances of his father's death.

Sensing the map has been uncovered, the same cultists that killed his father track down Troy. After a failed home invasion, they begin chasing him in a black Ford Torino as Troy has no choice but ride his bicycle as fast as possible. Eventually, Troy escapes by jumping into the back of a battered pickup truck heading into the Alberta countryside. Soon afterwards, the truck breaks down and Troy meets its owner: an alcoholic drifter named Zap Rowsdower. The two are able to get the truck to run again and Zap eventually warms up to Troy as they head to a nearby town. Upon arriving at a gas station to refuel, Zap phones the police to report finding Troy. As he does this, the cultists slowly approach them and begin to pursue them by vehicle into the countryside, where Zap and Troy are able to lose them.

Later that night, Zap reveals to Troy the origins of the Ziox civilization as well as details about his life before becoming a vagabond. The next morning, the truck stalls and the two are left with no other option than to walk the rest of the way back to civilization, unaware that the cultists are still in pursuit.

The two wander through the countryside and through a hidden cave. They find themselves pursued by the cult again as this leads them to the lodge of a shotgun-wielding hermit, Mike Pipper (Ron Anderson). A tear in Rowsdower's jacket reveals that he was a member of the same cult that has been after them. Before opening fire on them, Rowsdower calls Troy by his last name to save them. Pipper, recognizing the name, reveals that he was a close friend as well as an expedition partner of Troy’s father and has been hiding in the woods from Satoris for the past seven years. He later explains how the cultists are the last descendants of an ancient and advanced race called the Ziox, who had inhabited the area long before the Indians, and whose civilization was destroyed by their god in a month-long rainstorm after they turned to worshiping unholy idols. According to Pipper, the Ziox built a great city that was more advanced than "anything the ancient Egyptians or Romans ever knew." He believes that Satoris wants to raise the buried city in hopes that it will restore power to the Ziox and allow him to conquer/rule the entire world. After Zap leaves the two, Pipper confides to Troy that Rowsdower was with the cult the night Troy’s father was killed and that Zap may have possibly been the one that killed him. In a dream sequence, Rowsdower relives the night the cult’s insignia was branded on his arm, like the other cultists. Satoris seems to be able to torment Rowsdower through the mark, as we see Rowsdower writhing in agony while asleep, presumably having a Satoris-induced nightmare.

Eventually, Troy is captured by Satoris and his cult, who use the map to locate their ancient idol. Satoris means to make Troy the titular final sacrifice. Pipper gives him his horse and a rifle, directing him to the ancient Ziox sacrifice site that he was able to decipher from Troy's map. Rowsdower discovers the site of the idol and duels with Satoris. During the fight, Satoris mocks Rowsdower with the fact that he could not bring himself to kill Troy’s father, implying Satoris had to do it himself. Satoris is about to kill Rowsdower when Troy manages to intervene, shooting the cult leader in the back with Pipper's rifle. Satoris’ death causes the destruction of the idol and the reemergence of the lost city of Ziox, indicating that Satoris was the true final sacrifice. Instead of bringing about evil, the risen city (as Pipper had foretold) is actually a force for good, and Satoris' cult breaks up as its members are freed from his evil influence. Troy and Rowsdower observe the rise of the lost city from the ground, then the two drive off together.